"Ain't Miss Debatin'" is the fifteenth episode in Season 7, being the one-hundred-and-twenty-second episode overall.

When Tina is recruited by the debate team, she finds unexpected success and an even more unexpected relationship. Meanwhile, Louise and Gene convince their parents to help fund a stop-motion movie focusing on a surprising subject matter.

At lunch at Wagstaff, Henry and Todd approach Tina and ask her to join the debate team, as their female member previously quit. Tina however says she has social commitments, namely a patch of on-again with Jimmy Jr, until she sees him trying to impress another girl named Tamica with his elbow-kissing skills, and despite her fear of public speaking, she joins up. At the first meeting, she meets the team and Mr. Desanto, and learns that the next debate topic is on the US switching to the metric system, but despite her thinking it a good idea, they have been assigned the negative, and she will have to pretend to strongly believe in it. During prep, Henry coaches her on finding how to get passionate about something, something to get mad about during her delivery in the debate (like how he thinks of how the show Firefly was cancelled).

At the debate tournament, Tina is doing poorly in arguing, with DeSanto openly saying she is a dud, while Henry tries to tell her to "find her Firefly", at which point Tina visualizes Jimmy Junior flirting with Tamica, and she gives a passionate performance against the metric system as un-American. After the debate, Henry blurts out that he thinks she is beautiful and proposes that they go out on a date. Using a debate exercise between the two of them, Tina manages to accidentally convince herself. That night, Henry arrives for the date at the Belcher home, taking Tina out for a night to stargaze (which mostly is him using the telescope). Tina is meanwhile not attracted to him but goes along since he's "boyfriend material"(as in made of the same material as a boyfriend).

Tina manages to help the team win debate after debate, and soon they are upset against the King's Head Island team on an overnight weekend debate to possibly win the first trophy the school has ever had. At a club meeting, they learn the topic, "should a robot be president", and examine video of the opposing team: The only good debater is Sasha Whiteman, who Tina has previously met, another guy on the team west stress hiccups, the girl member has her braces lock up, and the last member is an exchange student from New Zealand named Duncan with a thick accent. However, his habit of saying that rebuttals in New Zealand are called "buttle rubbies" instantly attracts the butt-obsessed Tina. She is conflicted, as she cannot break up with Henry before the debate since it would break his heart, and they would lose as a result. Linda suggests that Tina get through the 24 hours, avoid Duncan and then gently break up with Henry the next Monday.

Avoidance proves impossible as the teams are put in a mixer event at the island hotel, with Henry encouraging getting closer to intimidate hem. Tina's obvious awkward attraction to the naive Duncan, who offers her a chest hair, gets Sasha's attention, and he changes the debate plan to have Duncan as his number two, with the hope of throwing Tina off. Later that evening in the hotel, Tina in her room watches Duncan body surf before panicking, then gets a taunting call form Sasha about how Duncan needs toweling off and being charming. After she disconnects he hotel phone, Sasha pulls the fire alarm to get her down to the beach. After the fire department calls the all clear, Tina bumps into Duncan and they watch the sunset. Duncan says that in New Zealand, turning off the light is called "turning on the dark", Tina impulsively kisses him, and again not be sure before running back to the hotel while Duncan stands confused.

At the debate match the next day, Tina is still upset about what she did and jumpy when Henry asks if she did tongue exercises for the debate, while Sasha keeps using Duncan's presence to taunt her. When giving the First Negative, Tina keeps slipping up and eventually confesses to kissing Duncan to the audience. When a shocked Henry asks, she also says she's breaking up with him. Duncan's argument mostly consists of him saying awkwardly that he likes kissing (and a robot president could turn into a plane), and Henry uses his time to cry at how long it will take to find another girlfriend. Sasha uses his time to argue for an emotionless robot resident, pointing to the devastated Wagstaff team as a sign of what emotions can do. Tina is given the rejoinder, and argues against logic, citing dating Henry as logical but the wrong decision, and that the brain and heart need each other, a president with feelings and physical attributes. Wagstaff is declared the winner. Afterwards, Henry says she did great and that he is ahead fo his dating schedule.

Meanwhile, without Tina having around after school, Gene and Louise hang out in the restaurant basement with their parents, where Gene accidentally leaves his backpack on the ground for Bob to trip on, causing a tray of hamburger meta to hit the floor. Louise is strangely drawn to the meat, and despite Bob's reluctance he agrees to let them play with it. While playing around with the meat, Louise crafts a human-type doll, and they decide to take a picture with Linda's phone. Louise realizes that they can make a stop-motion film by repositioning the meat figure in between photos. Later, they show the mini-film to their parents, as a sizzle reel to make a full movie in the restaurant, convincing Bob and Linda by desiring the characters (Meat Man and Lorna) in flattering ways relating to them.

Later in the restaurant, the Belchers and Teddy begin filming, with Louise writing the script and directing. As the days go on though, they notice that Meat Man is graying and attracting flies, with Louise refusing to "recast" with more meat, and decides to end the film with Meat Man with firecrackers gotten from Teddy. At that moment, Hugo and Ron show up for a surprise inspection, with Hugo aghast at them planning to blow up rotten meat in the restaurant. However, he reconsiders when hearing that they are doing a movie. Hugo proposes that Meat man ride off into the sunset, which Bob rejects, and Hugo agrees on the condition they do a deep clean and give him a grateful acknowledgment in the credits. Everyone pulls out their phone cameras for the one shot, and soon gray meat is everywhere in the restaurant, and in Hugo's headphone jack. Later in the night, the family watch the completed film, with Bob even crying at the end. 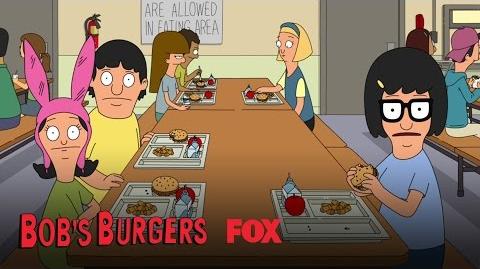 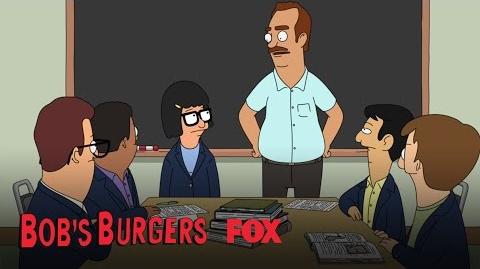 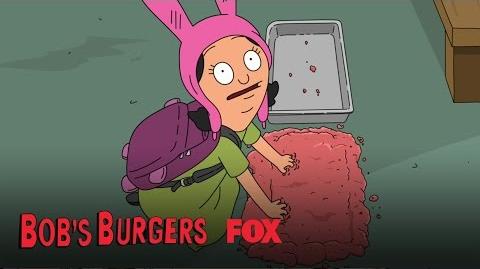