"Best Burger" is the fifth episode in Season 5, being the seventy-second episode overall.

Bob enters a burger-tasting contest, only to discover that his distinguishing ingredient is missing! To help out their dad, the kids go on a mission to find the ever-so-important black garlic.

It is the day of the Wharf It Down food festival on the street outside Wonder Wharf, where the first annual Best burger contest is being held. Bob is participating, alongside Jimmy Pesto and celebrity chef Skip Marooch. The clock starts counting down from 20 minutes as the contestants start taking their burgers (Bob making his "Bet It All On Black Garlic", which an angry Chuck Charles as contest shot puts as "Stupid Black Garlic burger"; Skip's "pomegranate and green chili chutney" burger; and Jimmy's is simply full of oregano). Bob laments previously singing up weeks earlier while drunk on wine, and and when ready for the ball garlic, he and Linda notice it missing. It transpires that before they left for the contest, Bob told Gene to get the balks garlic, but with his lack of attention and forgetting what black garlic is, Gene had left it back in the restaurant kitchen.

Bob tell the kids to go back to the restaurant and get the black garlic, and Louise manages to get Bob to agree to them having the next day off before leaving. After Mickey and another pedi-cab driver get in a fight over turf, the three kids run back to the restaurant.However, in the kitchen, Gene crushes the black garlic while reaching up to get his "back scratching spatula". Desperate to get more black garlic, Bob tells the kids o the phone to go to the store where he had gotten the black garlic: A local high-end specialty foods store called Fig Jam, where they had been banned the previous week following an incident insulting the owner and his high prices.

At the contest, Skip is being lavished praise on by Chuck, Jimmy finishes his burgers with 10 minutes left and leaves them under a heat lamp, and Bob is a target of Chuck's barbs. At Fig Jam, Ray the owner recognizes the kids and tells them to get out until Louise says they will pay double the garlic's worth, $16. However, Gene had the 20 dollar bill to use to buy, and says an older kid with a skateboard asked him for a dollar so Gene gave him the 20 and expects him to return with the change, to Tina and Louise's annoyance. The kids decide to steal the garlic and run out of the store. After running from Ray, they encounter Mickey and his pedi-cab with Ron, and convince the former to drive them to the food fest. Ray in turn gets Manny, Mickey's pedi-cab rival, to follow them.

Gene tries to hold the black garlic but his sisters explain tat he sometimes loses focus and screws everything up, to his shock. And that in the family, his name is a verb, "Gene-ing out", which shocks gene even more. At the contest, Bob complains about Gene when Linda point soju that he put their most irresponsible kid in charge of the most important item, and that maybe it's to avoid responsibility for screwing up the contest and not being the best. Bob reluctantly agrees. The kids text them that they have the black garlic, and Mickey manages to outrun a kiddie train that blocks Manny and Ray. Louise prepares to run the garlic, but Gene offers, wanting to redeem himself. The girls refuse given the foods available to distract him, so he distracts them and runs through the crowd with the garlic.

Ray is blocked by Tina, Louise and Ron, before running back to the store when it's pointed out he left it unattended and open. Despite the tempting food items on display (such as cupcake-flavored ice cream on a waffle, pizza tacos, and the Hot Fudge Car Wash), Gene manages to avoid it all and rushes to the contest stage. Gene and Bob apologize to each other, and with seconds to spare, Bob finishes the ball garlic burgers. The judges hate Jimmy's burgers, love Bob's burgers, and praise Skip's burgers, naming the latter the winner, to Bob's frustration. The family walks back to the restaurant, Bob saying they did their best, and telling Gene he loves him the way he is, before they notice the lien in front of the restaurant to open. It turns out the crowd, including Skip, wants to try the black garlic burger. However, the kids decide to use their day off then and there, running off to the Hot Fudge Car Wash. 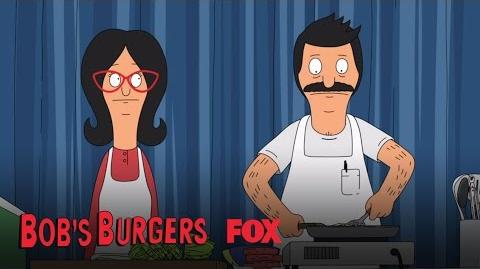 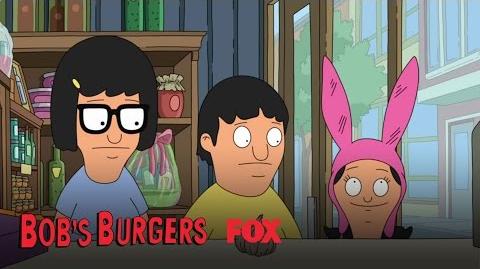