Big Bob is an obese, elderly man. He is balding with light gray hair and a moustache. He has a lot of body hair. He is 5'10.

In "Bob Fires the Kids", Bob comes to realize he didn't have a good childhood after he made him work in the restaurant. His voice is heard in flashbacks and is voiced by H. Jon Benjamin.

In earlier episodes, he was referred to in past tense implying that he might have passed away as Bob's mother did, but in "Uncle Teddy", Bob refers to him in the present tense, revealing that he's still alive.

He is finally seen for the first time in "Father of the Bob" and is now voiced by Bill Hader. It is revealed that his and Bob's relationship was on the rocks after he refused to allow Bob to serve his first creation, the "Baby You Can Chive My Car Burger" that he made and offered to Big Bob's Diner regular, Henry, while he was out getting his prostate examined. Also, Bob didn't want to continue working in the restaurant when he offered to change the name to reflect the both of them.

Bob and the family attend his Christmas party and after his prep guy's daughter goes into labor as he has no choice but to work with him. Things come to a head when Bob makes Henry the burger he didn't get a chance to eat 30 years ago.

After Henry eats the burger and likes it, he goes to The Junk Yard next door, a bar owned by regular, Pete. He and Bob make up while line dancing after Bob finds that he kept the first review of Bob's Burgers.

Big Bob is father to Bob Belcher, father-in-law to Linda Belcher and grandfather to Tina, Gene & Louise Belcher. His wife and Bob's mother died sometime before the flashbacks shown in "Father of the Bob". His brother-in-law was Ernest Lombard. It is not clear if Bob's cousin Vanessa is his niece or was Bob's mother's niece.

Big Bob as he appeared 30 years ago 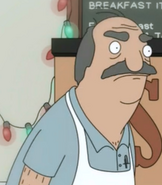 Big Bob as he appeared 20 years ago 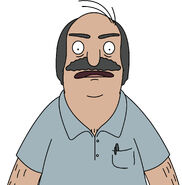