"Bob Actually" is the ninth episode in Season 7, being the one-hundred-and-sixteenth episode overall and is the show's 2017 Valentine's Day-themed episode.

With Valentine's Day approaching, Tina, Gene and Louise each find themselves wrapped up in love-caused chaos. Meanwhile, Bob decides on a romantic gesture in order to impress Linda.

It is Valentine's Day, and throughout town everyone is making plans for romance. At the Belcher kitchen, Linda is handing out cards to her children while Tina has an upset stomach due to winning a chili-eating contest with her siblings the night before. Linda gives Bob a box of chocolates, while a nervous Bob says he got her a present but has to wait.

At school, Louise talks with Rudy about how Zeke is selling bouquets of weeds for the day, when Rudy asks if she has lunch plans before awkwardly walking away. Later, she sees Rudy buying a bouquet from Zeke and mentioning that he's buying them for someone he's been friends with for a while, and concludes that she's the one Rudy like-likes. Naturally she is horrified and wonders out loud in the bathroom how it can be while talking to Tina (Tina using the bathroom at the same time), and she resolves to find a way to keep them buddies. She tries to un-attract him by describing in detail eating her boogers, but despite feeling sick, Rudy notes her appearance is healthy and thinks there might be something to it. At lunch, Rudy approaches Louise with a card and a Love Weed, but her fear is quickly gone when he reveals that they are for Chloe Barbash, who he actually is infatuated with and is in Louise's science class. A visibly disappointed Louise, who thinks Chloe is shallow, gives the gifts to Chloe before class, who ignores them. After class, Rudy talks to Louise, and reveals that he wants to kiss Chloe, with the card saying to meet on the playground at the end of the day so he can get his first real kiss. Louise tries to make clear that Chloe doesn't actually like-like him, given that the notes she passes to him use flirting to get his test answers. Louise confronts Chloe, who is unrepentant and notices Louise almost freaking out in trying to describe how nice Rudy is. Louise tries to convince Chloe to give Rudy his first kiss, and she refuses, as she's also gotten weeds from the more impressive Kevin Ishihara (he juggled three Beanie Babies in the last talent show). The two get in a scuffle and Chloe refuses to kiss Rudy. At the school playground, Rudy sees Louise, who says Chloe doesn't like him, and he should stop caring. Seeing Rudy sad over this news though, Louise plants a long kiss on him, telling him not to tell anyone about it after, while he feels flush.

Gene heads out of class to head to the cafeteria, to meet up with Hildy for his Wednesday ritual of day-old Taco Tuesday tacos, but another cafeteria worker, an Italian woman named Isabella catches him trying a vat of chocolate, and Gene instantly becomes infatuated with her before running out. Later, he returns during recess and she offers him the spoon to stir chocolate, which is a gift friend for her boyfriend Francesco, to Gene's jealousy. As they strike the chocolate, Isabella reveals that it is dark chocolate, to Gene's disgust (as he has a hatred of dark chocolate). As he tastes the baked dark chocolate, Gene is entranced, and imagines a future where he and Isabella get married and open a chocolate shop, but soon Francesco arrives and she leaves, leaving Gene heartbroken but with the spoon with chocolate on it.

Jimmy Jr. asks Tina to meet him in the gymnasium at lunch, which makes her happy, but soon she has "chili poops" and needs to frequently use the restroom. At lunch, after finding a strut walk was too much and inching towards the gum, she finds Jimmy Jr. using a trampoline in the hopes of doing a "sky kiss" in front of their friends present. Tina is however is afraid at jumping up and down on a trampoline and walks back to the restroom. After returning to the gym, Tina says she cannot do the sky kiss due to her diarrhea and apologizes. As she walks through the halls, she notices a pair of stilts in an open storage closet and gets an idea. Entering the class wearing the sites, Tina says she can't jump but she can walk on the stilts, and cornices the class to head to the gym for the sky kiss, which they perform before Tina runs back to the bathroom.

At the restaurant, Bob reveals to Teddy that he was planning to learn how to ballroom dance (as Linda keeps saying they should), but as he has not taken any classes, he plans to watch videos on the internet really quickly, but Teddy suggests he could take a class that day at a nearby dance studio that features ballroom classes. Bob manages to cut out by telling Linda it may have something to do with her gift, and Teddy goes along with him. At the studio, they find out the ballroom dance classes are cancelled, but Teddy suggests they take the next available class, which is hip hop dance. Shelly, the teacher for the class, makes Bob somewhat apprehensive with her unusual teaching methods (such as describing sitting backwards in a chair as "hip hop", while her son Flips begins mocking him tying his shoes as "not hip-hop", and while calling it sweet that Bob is there to learn for Valentine's Day, tells him he has to prove himself in a hip-hop dance battle in order to learn in the class. At the start of the battle, Flips tries to run onto a folding chair but trips and falls flat on his face (which also gets his braces stuck on his lips). Saying that Bob and Teddy have won the battle by default, to Bob's confusion.

Linda, running the restaurant in the meantime, notices Ms. Selbo enter and sit down. Selbo explains that she took a personal day, as her boyfriend Martin broke up with her and is eating at Jimmy Pesto's Pizzeria across the street. After eating a burger, Selbo admits that she and Martin broke up a year earlier, and was following him to Jimmy Pesto's, with Linda somewhat alarmed at this and Selbo's other admitted actions (such as stealing his dog and peeing on his mail and watching him open it). Linda figures that she needs professional help and some closure, and offers to bring Martin across the street for a face-to-face meeting. As Linda brings Martin back, however, they see Selbo making out with a guy at the counter, "living her damn life." Martin leaves after asking for his dog back. Linda gets a call form Bob, saying the gift is outside. In the street, Bob and Teddy perform an awkward hip-hop routine with the help of Shelly and Flips (which Linda loves anyway). 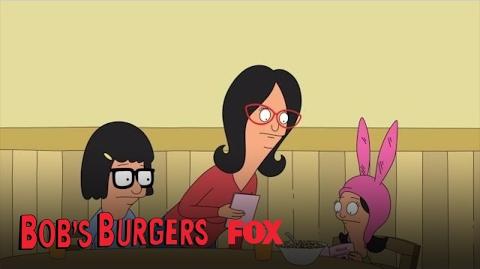 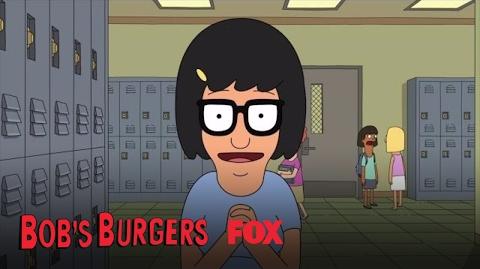 Jimmy Jr. Asks Tina To Have Lunch With Him Season 7 Ep. 9 BOB'S BURGERS 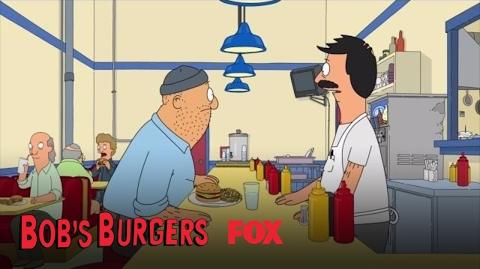