"Boyz 4 Now" is the twenty-first episode in Season 3, being the forty-third episode overall.

Tina has three tickets to the Boyz4Now concert and waits for Aunt Gayle to take her to the concert. Tina unexpectedly gets a call from her Aunt Gayle saying she cannot take Tina to the concert because Gayle accidentally pepper sprayed one of her cats thinking it was an intruder trying to sexually assault her. Gayle cannot take Tina to see Boyz4Now because she has to take her cat to the vet. This leaves Tina depressed, while Louise cheers because she doesn't have to go. Louise then helps Tina to go to the concert because Louise didn't cause Tina's depression.They ride their bikes to the concert and while they are on their way, they find Zeke and his cousin Leslie at a gas station. Zeke and Leslie are going to sell bootleg T-shirts and hot dogs at the Boyz 4 Now concert and they agree to help get Tina and Louise to the concert. On the way to the concert, between bootleg t-shirts and hot dog packages, Tina asks who Louise's favorite Boys 4 Now member is by showing her a magazine, but Louise does not care. At the concert, they find many screaming fans and one barfs in excitement after Louise says the word "boys". When the concert starts, Louise remains unimpressed until Boyz 4 Now member, Boo Boo removes the helmet to his space costume. It is now evident that Louise has developed a crush on him. Louise begins screaming out Boo Boo's name before dejecting the idea of liking a boy. Louise then goes to the bathroom, splashes water in her eyes, and repeats "You do not like a boy, You do not like a boy". On the way back to the concert, Louise passes many Boo Boo pictures until she finds Tina. Louise then questions Tina to get to know more about Boo Boo. Tina then realizes Louise likes Boo Boo and Louise expresses that she wants to slap his face instead of kissing it. After the concert ends, Louise and Tina make multiple attempts to slip backstage, but their plan is thwarted by security. After their failed attempts, Louise and Tina see that Leslie is buying a Box Turtle from the Boyz 4 Now tour bus driver and the girls sneak into the tour bus. They both hide in a clothes hamper, as not to be seen. As the band members enter the bus, they realize the bus is headed to Alabama. Boo Boo is then forced to be seated in a booster seat because he is under 80 pounds. After seeing Boo Boo in his booster seat, Louise jumps out yelling Boo Boo's name, surprising the band. Boo Boo is embarrassed, but grants Louise the opportunity to meet him. Louise is smitten by him and cannot speak. Eventually, she gets her wish when she slaps him in the face. The girls are then thrown off the bus and dropped off at a truck stop. They are then picked up by Aunt Gayle who states that her cat needs to wear goggles in case Gayle pepper sprays the cat again. At night, Louise removes a photo of Boo Boo from underneath her pillow and slaps it before replacing it and falling asleep.

Meanwhile, Gene has entered into the regionals for competitive table setting or "Scaping". After him being the only one there besides Ollie and Andy, beating them with his piece, "Dump Up The Volume". At the regionals, they meet a winning obsessed dad and his son, stating there will be only one winner. After Gene's magic themed table, he is entered into the finals and must construct a second table. Gene didn't know there had to be a second table, so he constructs a table-scape using the contents of Linda's purse. The table theme Gene displays is a Menstruation themed table which Gene names "Menstru-rant". The female judge is disgusted by the display, as it was full of tampons and maxi-pads w/ strawberry jam applied to them. Gene loses, but is not sad as the winning-obsessed dad and his son lost. 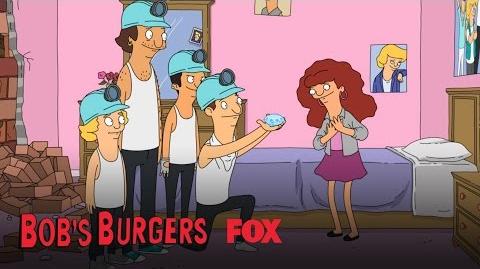 Louise Is Not Excited For The Boyz 4 Now Concert Season 3 Ep. 21 BOB'S BURGERS 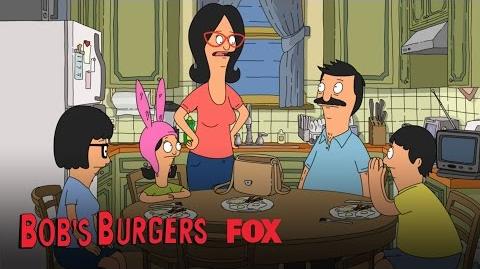 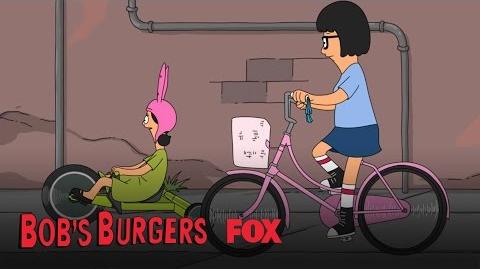 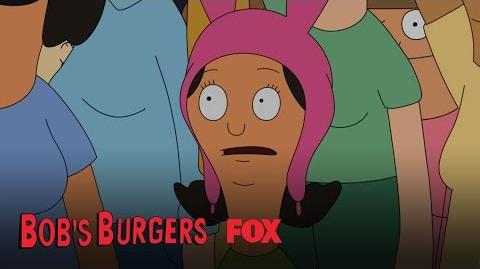