Dawn of the Peck

"Dawn of the Peck"

"Dawn of the Peck" is the fourth episode in Season 5, being the seventy-first episode overall. It is the show's third Thanksgiving-themed episode.

Linda and the kids decide that they would prefer to spend Thanksgiving at the Wonder Wharf pier for the first annual "Turk-tacular Turkey Town Festival", leaving Bob hurt and spitefully swearing off Thanksgiving completely this year, despite it being his favorite holiday. Linda plans to attending the festival's "Turkey Trot", a marathon where the runners run alongside turkeys, à la the Running of the Bulls. Teddy joins her for the run, while the kids ride the spinning teacup ride overseen by Wonder Wharf staff member, Mickey. The festival is sponsored by Mr. Fischoeder and his brother Felix, who has incompetently failed to get enough turkeys for the run, and substituted by mixing the turkeys with an assortment of other farm animal birds.

At the start of the race, the turkeys, geese, ducks, and chickens are released, but they are unnaturally aggressive and begin attacking the runners and anyone nearby. They soon overrun the Wonder Wharf and Linda is knocked unconscious by a one-eyed turkey dubbed "Cyclops". She wakes up inside the Wonder Wharf's Fun House with Teddy, who dragged her to safety. He explains that as a boy, he spent a summer on a turkey farm and learned a lot about them. The birds' aggressiveness is due to their pecking order being thrown into chaos after being mixed together with different bird species and humans. He explains that normally, a head bird would establish dominance by pecking the others, but without a clear pecking order, they are running amok and pecking everything around them. Linda realizes that the kids are still riding the rides and she and Teddy encounter Mickey, who admits that he left the kids on the still-running teacup ride and fled after being attacked by birds. The three of them go to rescue the kids. Calvin and Felix discuss the disaster outside Wonder Wharf, but are caught arguing during a news broadcast, exposing the disaster as their fault.

Meanwhile, Bob, unaware of the chaos, stays in the apartment singing and dancing along to an old Donna Summer CD and getting drunk. He rationalizes that skipping Thanksgiving is great, but succumbs to his desire to cook Thanksgiving dinner upon seeing his favorite turkey baster in the drawer. He leaves Linda a note and drunkenly and hastily runs to the grocery store, unaware of the danger around him.

Linda, Teddy, and Micky find the kids still trapped on the teacups with Andy, Ollie, and Regular Sized Rudy and try to shut the ride down using its failsafe. They succeed after several tries and return to the apartment with everyone to seek shelter. Linda finds Bob's note and they hurry to the store. They find Bob being attacked by Cyclops and the group is quickly surrounded by the birds. Recalling Teddy's words, Linda realizes that she can establish dominance and "pecks" everyone in the group with head butts, then pecks Cyclops, who starts a pecking order among the other birds. The order restored, they fall in line, viewing Linda as the alpha "turkey" and the group is able to safely leave. Back at the Belcher residence, the entire group sits down to enjoy Bob's dinner, but lose their appetites upon seeing the cooked turkey. Meanwhile, back at the Fischoeder residence, Calvin and Felix enjoy dinner, but are attacked by turkeys crashing through their window. 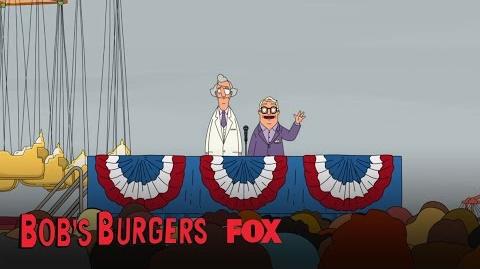 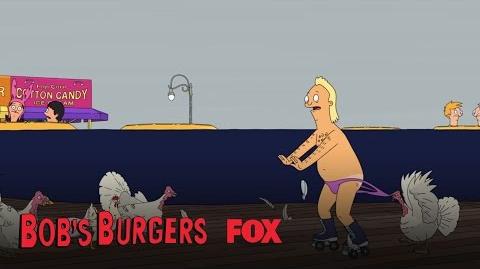