The end credits sequence of a Bob's Burgers episode frequently changes akin to the Burger of the Day or the Store Next Door. The end credits consist of a scene usually involving Bob and the family at work but can take place anywhere. Usually, elements from the episode reappear during these scenes like songs, characters and additional scenes sometimes. The first nine broadcast episodes in Season 1 (from "Human Flesh" until "Spaghetti Western and Meatballs") use the Comic Sans MS typeface on the opening and end credits. Starting with "Burger War", a custom font inspired by the one used for the show's logo is used and has featured ever since. However, the copyright year and production code still appear in Comic Sans. 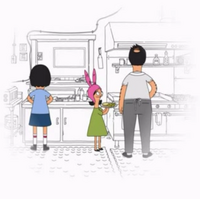 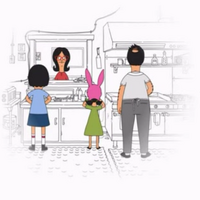 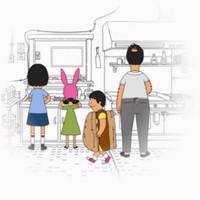 Every episode in Season 1 apart from Sacred Cow featured a shot of the family working in the kitchen with Tina and Louise constructing a burger, Bob cooking burgers, Linda appears through the hatch about halfway through to collect a burger to be served and Gene walks in from off-screen in the burger suit. In Season 1, Gene walks across the entire screen walking through the credits but from Season 2 onwards the credits completely obscure him and only appears in the restaurant for the last few seconds if no variant of Gene is used.

Standard credit sequence, one of only two episodes to play the opening theme music.

Standard credit sequence, one of only two episodes to play the opening theme music.

Standard credit sequence. Gene dances and plays his house composition on his keyboard.

Standard credit sequence. A Latin-influenced version of the theme plays

Standard credit sequence. Lifting Up the Skirt of the Night sung by John Roberts plays.

Standard credit sequence. The espionage music that is heard when Louise sneaks into her/Teddy's room plays.

Standard credit sequence. The butts song from Linda's nightmare plays, after that some scene music plays Edith Cranwinkle is heard saying "Let's get out of this ass parlor, it stinks."

Standard credit sequence. Gene's song "Three Sides Don't Make a Square" plays, Linda joins in and then persuades Bob to, after seeming a little reluctant during two lines he then belts one out massively. This is the first episode to use the current credits font.

Standard credit sequence. The sound of feedback from John Van Horton and the Music Extrusion's amplifiers plays, the sound cuts off just before they play a song.

Retrieved from "https://bobs-burgers.fandom.com/wiki/End_Credits_Sequence?oldid=48224"
Community content is available under CC-BY-SA unless otherwise noted.