"Bob Fires the Kids"
The Fischoeder Mansion is the home of the Belcher's landlord, Calvin Fischoeder, and his brother Felix .

It is a 2 1/2 story Victorian manor house with an unfinished basement, a detached garage and a tower centered above the front door.

Not much of the interior has been seen, but several rooms have appeared. These include: the foyer, living room, dining room, kitchen, basement and a small portion of the 3rd floor (in "An Indecent Thanksgiving Proposal").

The grounds consist of a formal garden with statues, a brick path and a fountain in the center behind the main house; an overgrown hedge maze beyond that, a tree house (where Felix lives due to being kicked out of the main house because of his sleep apnea and "sleep fartnea"), and a field out back where old, broken Wonder Wharf rides are kept.

The manor first appears briefly in "Bob Fires the Kids" when Calvin buys "blueberries" from Tina.

The manor's first major appearance is in "An Indecent Thanksgiving Proposal" where the Belchers pretend to be Calvin's family for Thanksgiving dinner in order to help him seduce a former flame of his.

It is featured as the main setting again in "The Oeder Games" where Fischoeder holds a water balloon fight on the grounds for his tenants in threat of a potential rent hike.

The basement is used as the setting for the plot of "The Last Gingerbread House on the Left" in which Bob gets wrapped into an intense gingerbread house building contest with Calvin and his friends. 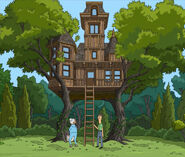 A map of the grounds as seen in The Oeder Games

The manor's previous design in An Indecent Thanksgiving proposal
Community content is available under CC-BY-SA unless otherwise noted.
Advertisement