"Flu-ouise" is the premiere episode in Season 7, being the one-hundred-and-eighth episode overall.

Louise gets the flu and is sliding into a fever state, but after the family accidentally melt her Kuchi Kopi nightlight in the oven, she becomes furious and right before she falls asleep, she swears that she'll never forgive them. She later goes on a Wizard of Oz style adventure in a dream with the disfigured nightlight and her toys who represent the family's personalities.

At the Belcher household, Louise is sick with a flu that is going around and upbeat due to having to miss school. However, while going through her toys, she realizes her Kuchi Kopi nightlight is still in the bathroom and wants Linda to retrieve it. In the process, Linda accidentally drops it in the toilet, and dropped in again after trying to rinse off in the sink, resulting in water in Kuchi. In order to avoid her wrath, they attempt to dry it with rice in the oven. While trying to stall for time ,they notice that Louise has spit out her flu medicine in order to remain sick, and an attempt by the family to hold her down and take it results in the bottle being smashed. Bob then realizes they left the Kuchi in the oven too long, and has melted into a deformed shape in the process. The family tries to pass off the toy to Louise in the hopes that in her sick state she will not notice. However, Louise sees it and furiously declares she will never forgive them for it. After they leave and attempt to apologize, Louise has a fever dream where she falls down a twirling rug into another world.

In the dream world, Louise meets a talking version of the smudged Kuchi Kopi, who suggests they g to his time-share mountaintop fortress so no one can hurt them. In the real world, the family are packing when Teddy calls on an unrelated matter, before offering to bring a heat gun remodel Kuchi. Back in the dream, Louise and Kuchi are walking in a forest when they are stopped by Bakeneko (with Bob's voice), trying to stop her from going since the fortress blocks the sun, but Louise fights and defeats him in a fight.

As Louise and Kuchi walk through a swamp forest, they are captured by another one of her toys, Akkoro Kamui (with Linda's voice), who again reiterates that the fortress is ruining life in the dream world and made the world dark. Louise, while expressing concern to kochi that everyone hates the fortress, manages to trick Akkoro and escape in order to try their tentacles together and flee. In the real world, the family switches out the toy to fix it, but Teddy's heat gun only manages to move the nightlights arms around to look like breasts. Teddy suggests going to a toy store nearby to buy a replacement, and Linda says to also buy another bottle of flu medicine at the pharmacy there. In the dream world, Louise and Kuchi are close to the fortress when they encounter two more toys, Dodomeki and Mizucho (with Gene and Tina's voices), but manage to steal their vehicles while the two are distracted. Just then, Louise and Kuchi realize there is an army of angry toys behind them.

At the toy store, Bob and Teddy are trying to buy a replacement Kuchi Kopi, but the owner Clyde insists that they know the backstory and reads them the first book in the series before selling the nightlight to them. In the dream, Louise and Kuchi manage to escape the army fo toys and close the drawbridge to the fortress. Louise is happy, finally alone and protected from everyone else who cannot get in, when she sees another, non-melted Kuchi Kopi, going by "Good Kuchi Kopi" while getting in a shouting match with the melted one over who is "Jerk Kuchi". Good Kuchi explains that the fortress is a metaphor for her closing herself off, and that she needs to argive her family. Louise refuses but is convinced to destroy the fortress and bringing in light, symbolically forgiving her family. Louise wakes up to find the others at her side, having replaced a bottle of mustard she held while asleep with the new Kuchi toy, but quickly sees through it and that Bob was holding the melted Kuchi bending his back. To their surprise, Louise forgives them. 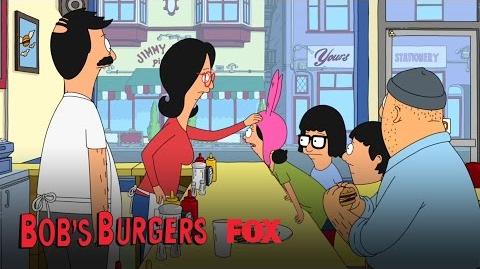 Louise Tries To Get Out Of School Season 7 Ep. 1 BOB'S BURGERS 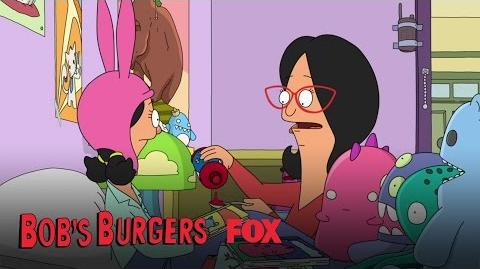 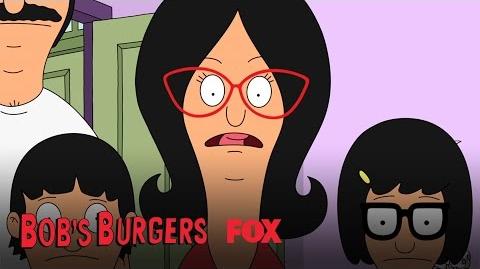