Bob's Burgers Wiki
Register
Don't have an account?
Sign In
Advertisement
in: Characters, Animals, Characters introduced in Season 3,
and 2 more 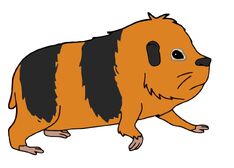 Francis was Teddy's pet guinea pig who made her only appearance in "Full Bars". Teddy prepares for his annual black and orange party by spray-painting everything in his apartment (including Francis) black and orange. As a result of this, Francis' natural fur color was never shown.

During the party, while Bob is changing into the costume Teddy picks out for him, he accidentally squashes her under the costume. After some revival attempts from Teddy, Gretchen & Mike, she dies and Teddy sets out to discover who killed her after the police wouldn't accept the case as an emergency. Teddy's unusual methods of solving the case involve checking everyone's shoes and allowing Gretchen, claiming to be a medium, to contact her spirit.

While holding a funeral for Francis around the back of the apartment, Teddy asks Bob to provide a eulogy where he eventually owns up that he squashed her under his costume. Teddy doesn't show any signs of anguish towards Bob as he agrees that he probably shouldn't have spray-painted her. They agree that they both killed her.

In the end credits sequence, her ghost is seen floating around the kitchen in the restaurant à la Watership Down.