"Full Bars" is the second episode in Season 3, being the twenty-fourth episode overall. It is the show's first holiday-themed episode, celebrating Halloween.

On Halloween, the kids ask Bob to let them go trick-or-treating unsupervised for the first time. Teddy is happy as Bob and Linda can now attend his Halloween party. When they get there, everything is painted black and orange, including Teddy's guinea pig Frances. Seeing that Bob is the only one in the party not in costume, Teddy pulls out a fat suit from his closet for Bob to wear.

While trick-or-treating, the kids are disappointed by the lousy treats that the locals are giving. So they take a ferry to the nearby island called King's Head Island, home to a posh community. They meet up with two neighborhood boys, Milo and Ned, and are shocked to find that many houses are giving them full size chocolate bars, something they're not used to back home. As the night gets late, Milo and Ned want to get off the streets because Hell Hunt is approaching. Hell Hunt is when the teenagers in the neighborhood come out and attack any kids still on the streets. The teens arrive and the Belcher kids escape while Milo and Ted are caught. Louise and Gene are ready to board the ferry to get back home, but Tina feels they owe a debt to the neighborhood for having given them the best candy they ever had and they all decide to go rescue Milo and Ned who are being held hostage with other kids in a tennis court.

Meanwhile, Teddy's party comes to a halt when Frances is found dead. Teddy assumes that someone murdered him and holds everyone at the party hostage until he finds out who was responsible. Linda spots black and orange hair on Bob's fat suit and Bob realizes that he might have killed Frances.

Louise steals a cell phone owned by Amanda, a teenage girl that the Hell Hunt boys have a crush on and uses it to lure the teens to Amanda's house for a skinny dipping party. The Belcher kids free the trick-or-treaters and then go to Amanda's house to get payback on the teens. They are spotted and the teens chase the Belcher kids down the street. The trick-or-treaters come out and fight back against the teens using the urine filled balloons that they were going to use on them.

After Teddy holds a funeral for Frances, Bob confesses to having possibly killed him. But then it is revealed that Frances was 14 years old, unusually long for a guinea pig. Realizing that Frances might have died due to old age or exposure to the black and orange paint, Teddy finally lets everyone go home.

The Belcher kids go home to enjoy their candy, except for Gene, who lost all of his in the chase. Bob and Linda then recount to the kids the events that happened at Teddy's party, unaware of what they were really up to the entire night. 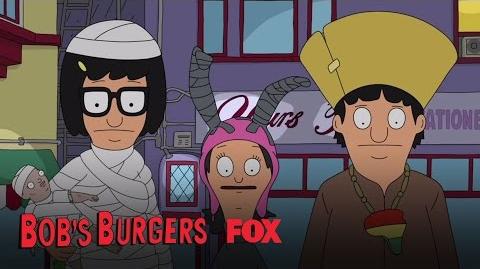 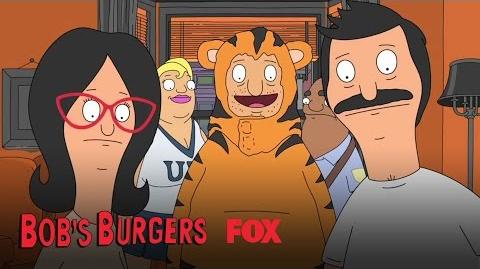 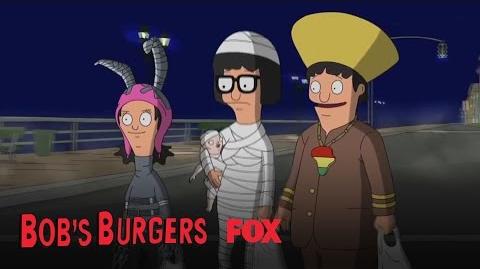