"Gene It On" is the twentieth episode in Season 4, being the sixty-fifth episode overall.

In the twentieth episode of the four season, Tina announces that she has decided to become a cheerleader. Her family (namely Bob)— who know she's not the typical "cheerleading type"— are unsure if it's a good decision, but Linda is all for Tina's new interest. After revealing her own long-held desire to be a cheerleader, Linda tells Tina she should try-out, despite Linda's underlying hostile feelings towards cheerleaders (namely her ex-friend Monica).

When Tina steps up to the stage in front of a pannel of cheerleaders (including teenage diva Tammy, who blackmailed Tina in season three), she embarrassingly takes a spill and hits her head on the table. Gene and Louise, who came to see Tina's audition, both witness the fall and Gene reacts quite dramatically the spectacle. Tammy suggests asking Gene to join the squad, and upon convincing him of the benefits, he agrees. Tina doesn't appear to be upset that Gene got the spot on the squad, but does end up with a swollen tongue and is informed by the nurse that she won't be able to talk for a few days. Louis offers to be her interperator, and (despite Tina's apprehension) gets out of doing schoolwork in order to aid her sister.

Once Gene informs his mother that he made the squad, Linda becomes overjoyed. Though Gene is at first excited to share his love of cheer with his mother, he quickly grows tired of Linda's overly-enthusiastic involvement in his new activity. His irritation eventually causes him and Linda to have a fight about her over-bearing attitude, and it consequently brings up some old feelings Linda has about Monica and her high school days. It is said that Monica was a cheerleader and treated Linda quite poorly during their friendship, often using her for rides to school and various other things which made Linda very angry after their friendship ended. So, when Gene's sour attitude interfers with her excited outlook on his new position as resident cheerleader in the house, it brings back feelings of jealousy and resentment in Linda, who—in anger— tells Gene he's “just like Monica.”

Meanwhile, Tina is becoming increasingly aggravated toward her younger sister, who had used Tina to excuse herself from schoolwork. Throughout her day at school, Louise continues to manipulate what Tina says, only furthering Tina's anger. Eventually, Tina snaps and screams at Louise that she doesn't need her to translate, and instructs her to leave. However, her attitude is quickly swayed with Jimmy Jr., whom Tina is very much in love with, stops by the say hello. Louise, who has ignored Tina's instruction to stop translating, lands Tina a date with Jimmy Jr. at a ritzy dessert restaurant in town. Thus, Tina re-hires Louise as her translator.

When Gene begins cheerleading and proves to be excellent at it, the resident male cheerleader, Todd, on the team becomes jealous. Fueled by the jaded male cheerleading coach, Mr. Ambrose (who wanted the job of drama teacher), Todd plans an attack on Gene to get him booted from the team. Todd challenges Gene to a cheer-off, but ultimately fails when his chants don't hold up to Gene's. So, after his cheering skills fall short, Todd meets with Zeke, the school's best wrestler— and tells him that Gene is responsible for his loss at the big meet a few days prior. Zeke and Todd conspire to force Gene to leave the team, and Zeke attacks Gene in the hallway, threatening that he'll continue to bully Gene unless he leaves. Gene refuses to leave, much to Todd's chargin, and maintains his role as Yell King.

When Mr. Ambrose announces that he jokingly sent a tape to a big cheer competition, and that the Wagstaff team was invited to compete, the students are estatic but find it difficult to invent a new routine on short notice. Gene suggests they do a futuristic-themed routine, complete with robot costumes, the group (except for Todd) excitedly agrees. Upon arriving at the competition, the group is shocked to see another school has stolen their routine. Mr. Ambrose admits he leaked their practice tape, in order to stir up more drama. The Wagstaff group is very dejected, until Gene hesitantly suggests the “Pigwheel”, a dangerous routine Linda created. The group agrees to attempt to routine, but ultimately fail and earn last place.

At the dessert restaurant, Louise continues to talk to Jimmy Jr. for Tina, who desperately attempts to convey what she's actually saying to her date. Eventually, after Louise has spent all of Jimmy Jr.'s money and Tina is past her breaking point, she addresses him directly. She explains that she wanted a simple movie date, and he agrees.

Eventually, it all works out, with Gene and Linda and Tina and Louise. 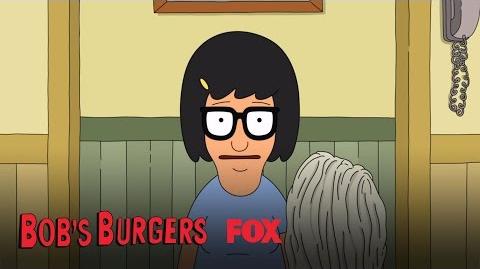 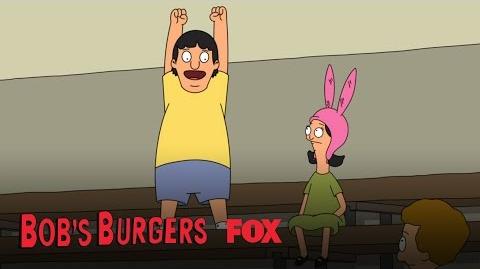