"Hawk & Chick" is the twentieth episode in Season 5, being the eighty-seventh episode overall.

While Bob and Louise are at the Wonder Wharf farmers market, Louise notices an elderly Asian man who looks like Shinji "Koji" Kojima aka Rising Hawk, the star of their favorite martial arts movie series. The two follow Koji to his hotel, the Decency Inn. While trying to figure out how to talk to him, the former star grabs a mop, appearing ready to attack the two Belchers. It turns out though that Koji was just joking, and is pleased to have run into fans. Bob and Louise take Koji back to the restaurant for lunch where he meets the rest of the Belchers. While one of the Hawk and Chick movies is playing on the TV, The Belchers notice Koji tearing up. It turns out that the reason why the former star is in the area is that he wants to reconcile with his daughter Yuki aka Chick, whom he hasn't spoken to in thirty years since their relationship was strained after Koji and his wife divorced. Koji though is worried that Yuki won't want anything to do with him. Louise comes up with an idea; host a movie festival in the hope that Koji and Yuki will attend and makeup. The rest of the family agrees that it is a great idea.

Bob and Louise try to talk the manager of Top Hat Cinema about a "Hawk and Chick" film festival, but he refuses due to a bad experience with a Meg Ryan one. A worker named Dominic overhears the idea and tells Bob and Louise that they could host a secret festival after the manager leaves for the evening. Dominic also agrees to try to find a film print that can be played in the theater's projector.

Louise and Bob then have to go to Deduction Junction to convince the now forty-year-old accountant Yuki to go to the festival. At first, Yuki is against the idea, not wanting to deal with her past career. Louise and Bob lie to her and say it will just be a festival for her, not her dad. The idea of not having her dad there convinces her to go just for the heck of it.

Later on, Dominic shows up at the restaurant with some good news and bad news; the good news is he got a print, bad news it is in the original Japanese, neither dubbed nor subtitled. Gene though comes up with an idea to dub the movies using the whole family and a tabletop cassette tape recorder.

The night of the Festival comes and the Belchers are barely able to get Both Koji and Yuki into the theater without them seeing each other. Inside, Yuki tells Linda that the film is bringing up painful memories. To make matters worse, the tape recorder's batteries die, leaving the family to dub the rest of the film live from one microphone. Yuki, about to leave is stopped by Bob (pretending to be Hawk in the film) by saying that Hawk is sorry for supporting her. Louise (as Chick) apologizes to Hawk for leaving him. Through their banter, Bob learns that the fight between Hawk and Chick makes Louise worry about the same thing happening to her and Bob. Bob though assures her that "This Hawk and This Chick won't talk for thirty years". Bob then tells Koji that Yuki is there. On the mic Koji talks to his Yuki, apologizing for straining their relationship and saying how much he misses his chick. Yuki, finally forgiving her dad, hugs him, sending the Hawk and Chick fans into applause. The Belchers admit that they are genuinely surprised how well their plan had ended. 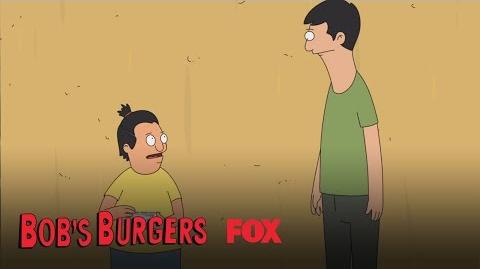 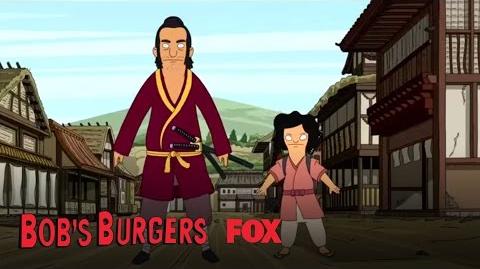 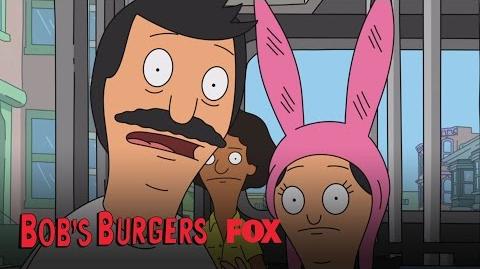