James "Jimmy Pesto" Poplopovich, Jr. also known as Jimmy Pesto, Jr. or J-Ju[1] is the son of Jimmy Pesto and the older brother of Andy and Ollie Pesto. Jimmy works as a busboy at Jimmy Pesto's Pizzeria.

Jimmy has dirty blonde hair and a cleft chin similar to his father's. Being 5'2", he is the tallest student at Wagstaff School. He wears a yellow shirt under a blue vest, black pants and white shoes. He is sometimes seen wearing red headphones. When he was in fifth grade, he wore dental headgear, which possibly contributed to his lisp.

It's unclear how Jimmy Jr. feels towards Tina, despite her affections often being obvious and bordering on obsessive. This could likely be him being more underdeveloped in romance, while he shows a definite interest in girls and dating, he is often far more interested in his own hobbies and his relationships with his friends. This complicates his relationship with Tina, who has a far more precocious interest in boys and romance.

While he often shows romantic interest in Tina and at times has even considered her his girlfriend, he often tends to forget they are dating in favor for time spent with best friend and wrestling buddy, Zeke, and dancing by himself.

Jimmy Junior has a severe, sometimes unintelligible, lisp due to a natural speech impediment ("The Unnatural"). In "Ex MachTina", it is revealed that his father is taking him to speech therapy.

Jimmy's passion is "dancing his feelings." His dancing is always his first priority, even when it comes between him and Tina in "Presto Tina-o", and him and his father in "Ex MachTina". He even competes for Tina's hand in a dance battle in "Two for Tina".

Jimmy Junior first appears in the episode "Sheesh! Cab, Bob?" when Tina turns 13 and invites everyone in her class to her party, including Jimmy Jr. Tina plans to kiss Jimmy Jr. under a disco ball at her party, but the rivalry between Bob and Jimmy Pesto prevents Jimmy Jr. from attending unless Bob shaves off his mustache and gives it to Jimmy Pesto. At the party, while Tina is dancing with Glitter, Marbles and Cha-Cha, Bob shows her that he was able to get permission for Jimmy Jr. come to her party. She then kisses Bob on the cheek and says, "Thanks, dad, you're the best pimp I'll ever have." Tina and Jimmy Jr. then kiss under the disco ball.

In "The Belchies", Jimmy Jr. is invited by Tina to a treasure hunt at an abandoned Taffy Factory. Jimmy decides to invite his wrestling buddy, Zeke, and his little brothers, Andy & Ollie. In the end, Tina rejects him, but goes back after seeing his butt.

In "Can't Buy Me Math", Jimmy shows interests in Tina after she begins fake dating Darryl. He seems happy Tina is single again after she and Darryl break up and invites her to go bowling. When he finds out about the fake dating, he leaves bowling but seems excited to later see Tina in remedial math.

In "Two for Tina", he shows jealousy towards Josh and tries to win back Tina; first with the help of Zeke, then with Gene & Louise. He later shows up at the performing arts school dance that Josh and Tina are attending and challenges Josh to a dance-off. Tina then breaks the fight up because it was getting too dangerous and recommended that they "share" Tina in what would be a polyamorous relationship. Both Jimmy Jr. and Josh don't really feel like it's right, so they tell her that if she is a one-man girl again, they wouldn't mind asking her out.

In "The Unnatural", Jimmy agrees to go on a date with an overly-caffeinated Tina, although he seems confused by the speed at which she asks him, and it's unclear if the date ever happens, since she set the time for 5 AM. After Linda and Louise sell the espresso machine, Tina's caffeine withdrawals cause her to snap at him.

In "Gene It On", Jimmy Jr. goes on a date with Tina who is unable to properly speak due to biting her tongue while cheerleading. Louise attends the date along with them playing as Tina's "translator." Upset with how Louise is making the date go, Tina tells Jimmy she would have rather had the date been "walking along the beach, watching 27 dresses, and kiss and stuff." Jimmy agrees and they share a kiss.

In "The Land Ship", after Tina & Jordan split due to her painting over the graffiti on the ship, Jimmy turns to Tina and asks her about her relationship with Jordan. Tina says they went out for a few days and they kissed, but she couldn't breathe. Jimmy Jr. responds with, "I don't need the details," but then asks her to watch the parade together.

In "The Hormone-iums", Tina & Jimmy Jr. kiss while playing spin the bottle at Jocelyn's birthday party.

In "The Gene and Courtney Show", Jimmy Jr. buys Tina a rose for Valentine's day and they kiss at the end of the episode.

In "The Quirkducers", Tina (dressed as the Quirky Turkey) and Jimmy (dressed as a pig) kiss at the end of the play.

In "Ex MachTina", Jimmy Jr. Tina talk for hours while Tina is a robot. Because Tina is a robot, Jimmy Junior is able to open up to her about his life and even reads her his songs (musoeums). He eventually asks Tina to be his date to the 8th grade bonfire, but as a robot. Tina realizes this is unhealthy and goes in person to the bonfire and they kiss.

In "Bob Actually", Jimmy Jr. plans to kiss Tina on a trampoline, but Tina is unable to do so because of having diahhrea. At the end of the episode, Tina uses stilts while Jimmy Junior jumps on the trampoline and they share their "sky kiss."

Jimmy Junior is Tina's love interest although he doesn't always realize that she likes him. He has shown to not be as "developed" as Tina, who is a lot more precocious when it comes to boys and relationships. In "Burger War", Tina attempts to get him to notice her by slow dancing. They have kissed 6 times and have gone on a date, but he sometimes rejects Tina's advances. In "Ex MachTina", Jimmy Junior and Tina truly connect while Tina is a robot. They talk for hours and kiss at the end of the episode.

His interest in Tina is shown to fluctuate depending on the needs of each episode. Interested at times and unresponsive at others depending on the narrative, and in episodes like "V for Valentine-detta" & "Ain't Miss Debatin'", he can be shown as an inconsiderate player.

He has also shown to "want what he can't have." He shows the most interest in Tina when she is uninterested in him or in another relationship.

Zeke is on the school's wrestling team with Jimmy Jr., and the two are shown to have an incredibly close friendship. Jimmy Jr. is often shown to put preference on his time with Zeke over Tina and everyone else. It’s shown that Jimmy Jr. really needs Zeke’s approval, especially in “Stand by Gene”, when Jimmy Jr. feels the need to compete with Gene for Zeke’s attention (unbeknownst to Gene).

Pesto seems to hate his son's dancing. In "The Belchies", when Jimmy Junior starts dancing he yells, "Don't tell me not to dance, dad!" This dynamic is reinforced when Jimmy Junior confesses to Tina-Bot that his dad is trying to keep him from dancing in "Ex MachTina".

Jimmy Pesto seems to be not a very affectionate parent, in one instance, causing his son to break character and marvel after simply being told "Great job!" by his father (as he left in the middle of the show), on his role in Working Girl the Musical in "Work Hard or Die Trying, Girl".

Jimmy Pesto says in front of his own 3 sons that he considers Trev the son he always wanted.

Jimmy Jr. as an adult in Tina's lobster fantasy 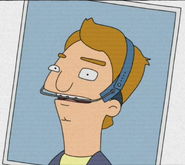 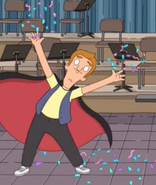 Jimmy Jr. and Tina in a falling elevator

Jimmy Jr. being a bad runner