Jocelyn is a student at Wagstaff School. She made her first appearance in Spaghetti Western and Meatballs as part of the schools conflict resolution program with Tina and Jimmy Jr. She is best friends with Tammy Larsen.

Jocelyn is a very vapid and dim-witted girl, tending to follow the crowd and let other people do the thinking for her, instead of doing it on her own. For this reason she clings to Tammy, following her around and agreeing with everything she says in an attempt to be cool and popular. She speaks with a stereotypical "valley girl" accent, adding "-uh" to the end of most of her sentences.

Jocelyn has pale-tan skin and blonde hair pulled to the side in a green scrunchie. She is taller than many of the students at Wagstaff. She usually is seen wearing a light-purple T-shirt that shows her stomach and light blue 3/4 jeans with a black belt. She wears black sneakers with white laces and socks. It is unknown if her shirt and pants are meant to be shorter or if she is growing out of them. She also has been seen wearing a Wagstaff cheerleader uniform in "Gene it On" and a turkey costume in "The Quirkducers." In "The Hormone-iums," she wore a lavender tank top that reveals her stomach and a purple skirt with lavender shoes at her birthday party. She dressed up as Judge Judy in "Teen-a Witch" and wore a secretary costume in "Work Hard or Die Trying, Girl."

Her mother first appears in The Runway Club driving her to detention, like several characters' family in the series she bears a strong resemblance to her and is voiced by the same actor (John Roberts). She appears again in The Horse Rider-er. In The Itty Bitty Ditty Committee, she mentions having a cousin who was kidnapped by an improv group. In The Hormone-iums, it is revealed that she has a brother. In "V for Valentine-detta", Tina Belcher mentions that she has a cousin who lives in Clearwater, FL who is also called Tina. Whether this is the same cousin who was kidnapped by the improv group is unknown. In "A Fish Called Tina", she mentions having a grandmother who is flying to Tampa.

"You guys, I'm secretary number one! Eat it, two and three! Yay!"

"They're just like Mario and Luigi, they're so in love."

"I need to start think for myself. Unless you guys don't think that's cool, then I won't."

"We have immunity. That means we don't have to design an outfit this round and we can never die."

Jocelyn as Cyn from Working Girl in Work Hard or Die Trying, Girl

Jocelyn guarding the castle in Litterboxia from The Gayle Tales

Jocelyn as a "sexy Judge Judy" in Teen-a Witch

Tammy and Jocelyn in the The Runawy Club

Jocelyn and Tammy in The Quirkducers

Add a photo to this gallery 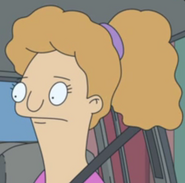 Add a photo to this gallery
Retrieved from "https://bobs-burgers.fandom.com/wiki/Jocelyn?oldid=50235"
Community content is available under CC-BY-SA unless otherwise noted.