Jodi is a student at Wagstaff School. She first appears in "Slumber Party" where Linda invites her to Louise's slumber party.

Jodi wears glasses and has blonde hair. She wears a green shirt, beige shorts and gray shoes. She is also said to wear rubber gloves by Tina because of her fear of germs, but this is yet to be seen. Her pajamas are light green.

Jodi has a severe fear of germs (mysophobia) which often interferes with her daily life. She often struggles to sit down because of it. To avoid germs, she is frequently seen using hand sanitizer. She also gives out statistics about germs.

While making cupcakes at the slumber party, Louise tricks her into believing that Linda has a number of gross fictitious ailments such as "Sewer Palm", "Strep Thumb" & "Whooping Butt." This causes her to panic and Bob takes her home from the party.

Jodi next appears in "Tina Tailor Soldier Spy" where she is shown to be a member of Thundergirls Troop 119 along with Tina. Like the rest of the troop, she is suspected of being a mole for Troop 257. To get her to talk, Louise threatens to flush her glasses down troop leader, Ginny's, toilet.

Jodi briefly appears in "Secret Admiral-irer" with the rest of Troop 119 at the Elegant Doily Retirement Home, but doesn't have any lines.

In "The Hurt Soccer", she states that she signs up for soccer every year because it makes her "feel alive."

Jodi in her pajamas in "Slumber Party" 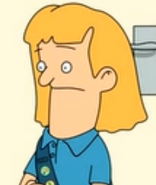 Jodi without her glasses in "Tina Tailor Soldier Spy"

Jodi with her father in "Motor, She Boat"
Community content is available under CC-BY-SA unless otherwise noted.
Advertisement