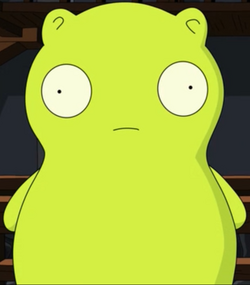 Kuchi Kopi (くーち こーぴ) is a fictitious character that has appeared in many forms throughout the series. He has been seen as a book character, nightlight, toothbrush, carrier bag, a set of walkie-talkies and in Bob & Louise's fantasies. Kuchi Kopi is Louise's favorite toy; she has been known to go crazy without it.

Kuchi Kopi is a light green spirit-like creature with short stubby arms and cat-like ears. In Bob's hallucination in "Crawl Space", he additionally wears a formal light blue bow tie taking the role of Lloyd the bartender from The Shining.

Kuchi Kopi's origin is unclear, but he is most likely a character from an eponymous Japanese series of books. He is described as "a spirit that can be different things to different people" by Bob, a likely reference to the ambiguity and unclear definition of the character. Kuchi Kopi is first seen in "Crawl Space" where Louise gives Bob her Kuchi Kopi nightlight while he is in the crawl space hiding from Linda's mother, Gloria. After Bob realizes he is actually stuck, and Linda realizes he was deliberately hiding from her mother, she makes him stay in there. While stuck in there, he starts to lose his mind, talking to the night light and eventually hallucinating that it can talk (among other things). He proceeds to imagine that there is a speakeasy in the walls and that Kuchi Kopi is the bartender, paying homage to the Stanley Kubrick movie, The Shining. Kuchi then starts to persuade Bob to kill Gloria as she is interfering with the restaurant. At the end of the episode, when Bob is freed from the wall, Louise and Bob start fighting over the nightlight because Bob refuses to give it back.

During the opening sequence for "Fort Night", Kuchi Kopi appears on a title card for only a couple of frames which reads "Happy Halloween," intended to scare viewers. In "Flu-ouise", while ill with the flu, Louise asks Linda to bring her the nightlight which is in the bathroom as he is Louise's "doodie buddy." Linda accidentally drops the nightlight in the toilet and water ends up inside of it. Tina suggests the family put the nightlight in the oven with rice to dry it out, but they leave it in there too long and it melts, disfiguring it. Louise later swears she will never forgive her family for what they did to her nightlight. But she then goes into a fever state dream where she and the melted Kuchi Kopi go on a Wizard of Oz style adventure to his fortress, meeting some of her other toys along the way that have the voices of her family. The toys sing about how the fortress being built has ruined their day-to-day lives. It is later revealed that the Kuchi Kopi who Louise travels with is a bad Kuchi Kopi and a good Kuchi Kopi is also occupying the fortress. The good Kuchi Kopi persuades Louise to forgive her family and reveals that the fortress is a metaphor for Louise not forgiving them and closing herself off from them. Bob & Teddy find Louise a new nightlight thanks to Clyde at the About a Toy toy store and Louise wakes up with the new nightlight and forgives the family for what they did.

Kuchi Kopi will appear again in "The Bob's Burgers Movie," alongside Bad Kuchi Kopi and several of Louise's other toys. 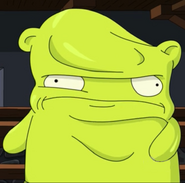 The melted Kuchi Kopi after Teddy tries to fix it with his heat gun. 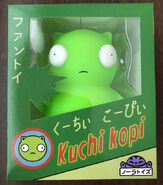 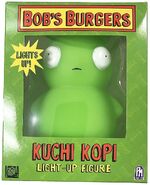 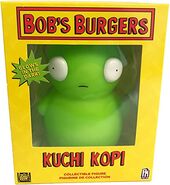 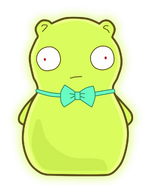 Kuchi Kopi in a bartender uniform in the episode "Crawl Space"