"Li'l Hard Dad" is the fourteenth episode in Season 5, being the eighty-first episode overall.

Bob becomes obsessed with his new automatic helicopter. When it falls apart for no reason, he enters into a battle with the manufacturer in order to receive a refund. Gene assists Bob in his quest, but things quickly get out of hand and end in a crazy helicopter battle. Meanwhile, Louise and Linda help Tina prepare for her oral book report.

Tina, Gene, and Louise come home from school, with Tina rushing in. Tina says that she forgot about a book report that is due tomorrow, as Bob unveils an RC helicopter he bought on an online auction. The chopper breaks apart immediately upon landing. Tina narrowly avoids getting hit by shoes falling off the power lines.

As Bob complains to the seller, Gene is upset that he failed to warn Tina about the shoes, as he saw them the whole time they were falling off the lines. As a result, he decides to go with Bob to complain about the chopper. On the drive there, Bob talks about why not to let things go.

Having arrives at the place, Sheldon, the seller, proceeds to call Bob "heliflopter" and poke him using an RC chopper with an antenna coming out of its front. After Bob loses, he comes back again, and is attacked by a swarm of RC floating fish. After this, Bob and Gene go to an RC chopper store called The Hobby Hole, and buy a $300 RC war chopper after the employee named Terry explains that Sheldon used to work there until he was fired, because he stole their food from out of the fridge in the break room. When he was being confronted about it, he attacked them with the RC choppers.

Bob climbs to the roof across the street from Sheldon. Sheldon comes out with a version of Bob's helicopter he improved. As Bob is about to lose, the employees arrive to assist him as revenge for when Sheldon attacked them. Sheldon's chopper is shot down, but Bob falls onto a ledge. Soon afterwards, Sheldon comes out with a chopper that shoots darts at Bob.

Gene returns with his keyboard and plays Bob's quote about not letting things go. He talks about how you have to let things go sometimes. After Sheldon is declined his job back, and after they get home, Bob and Gene have a discussion about how Gene saved the day.

Meanwhile, Linda and Louise are assisting Tina on her book report on The Call of the Wild. As they make a performance, Tina gets stressed out by it. The next day, at the book report, Tina has a breakdown and freaks out. She gets a good grade as a result of it showing all the themes of the book. 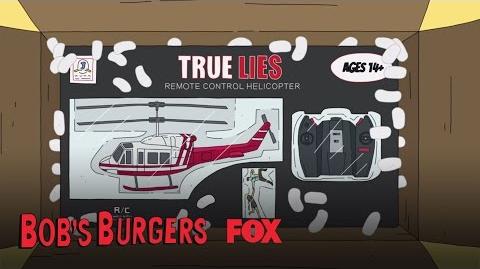 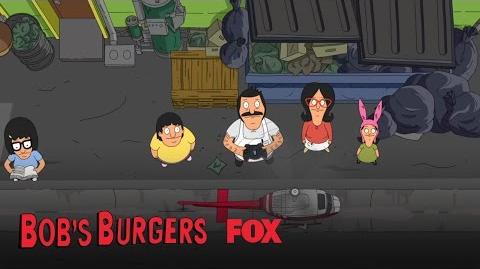 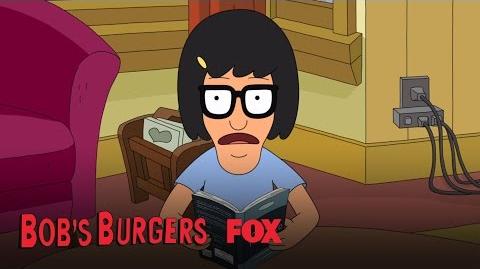