Bob's Burgers Wiki
Register
Don't have an account?
Sign In
Advertisement
in: Characters, Characters introduced in Season 4, Animals,
and 4 more 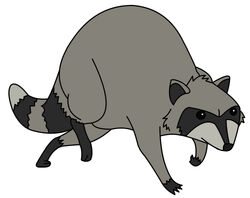 Little King Trashmouth is a raccoon who lives in the alley behind Bob's Burgers.

He is first mentioned in "Two for Tina" when Linda tells Bob that there will be such a thing as a chaperone king as there wasn't a raccoon king in the alley until she picked him out. She also mentions that he is gay and got married to his boyfriend, Gary.

He first appears in "Slumber Party" where Linda looks out for him and takes him in after a mangy raccoon she dubs, El Diablo, attacks him. He later escapes from Bob and Linda's bedroom and scurries around the apartment. He is next seen in the bathtub chewing on the plastic bag containing Jessica's wet pajama bottoms. At the end of the episode after Bob, Linda & Teddy capture El Diablo in the alley, King is let back out of the apartment.

He is mentioned in "Eggs for Days" when Bob finds Big Baby Pudding Snatcher in the crawl space.

In "Just One of the Boyz 4 Now for Now", Linda mentions that she believes that he and Gary renewed their wedding vows as it was their anniversary.