Logan Berry Bush is a student at Huxley High School and Louise's arch-nemesis.

Logan first appears in "Ear-sy Rider" along with two of his friends (Jacob and Scotty) having taken over steps that are between Wagstaff School and Bob's Burgers. After repeated attempts by Louise to pester him, he confiscates Louise's bunny ear hat and begins wearing it. Louise starts following Logan around town, at his school and the mall attempting to get it back.

After Logan says he threw them in the trash behind a branch of Pancho's Tacos which leads Louise to an incinerator, believing her hat had been destroyed, she calls on the One Eyed Snakes motorcycle gang after cashing in their favor card to cut off his own ears. Logan gives the hat back in a panic, revealing that he didn't throw them in the trash like he said earlier.

Later on, his parents and his friends' parents visit the restaurant in anger at the commotion surrounding the bikers threatening him; Louise offers her hat but instantly retracts the offer, revealing she was only kidding.

He next appears in "Mother Daughter Laser Razor" after he calls his mother 'the B-word' and is taken to Dakota's mother/daughter healing seminar that Linda and Louise are attending as there are no other suitable seminars available. After getting locked in "The Uter-Room" with Louise for their bad behavior, they break out and run away to Lasers and Gentlemen to play laser tag with the other girls attending the seminar, locking their mothers and Dakota in "The Uter-Room."

He made a non-speaking cameo in "World Wharf II: The Wharfening (or How Bob Saves/Destroys the Town - Part II)" during the "Bad Things are Bad" musical number, playing skee bowl at Family Funtime.

In "Late Afternoon in the Garden of Bob & Louise", he is working in the community garden where Cynthia is the garden master. Bob agrees to hire Logan as an unpaid intern after telling Cynthia that his restaurant is an example of the sort of place she wants him working, a "crappy job that builds character," and she then rewards Bob with a plot in the garden. This angers Louise and causes her to quit. Later, after Bob realizes how selfish he has been, he allows Louise to fire Logan, but at a cost, he loses his plot in the garden.

In "Large Brother, Where Fart Thou?", which originally had "(AKA Logan's Run)" attached to it, Louise throws a moldy cantaloupe melon off the emergency exit of the apartment, not realizing Logan skateboarding with his friends (Jacob and Scotty) are below in the alley. The melon breaks on Logan and he threatens to make their lives a "living hell." After luring them out of the apartment, Logan gives chase as Gene and Louise run into the town's Lobsterfest and hide from Logan in a warehouse. Logan eventually finds them and Gene offers Logan to give the Reserve Norwegian Stinkhold, a signature move of the wrestler, Norwegian Steven, that he threatens Louise with to him.

A photo of Logan appears on the Bulletin Board of Banishment at Family Funtime in "The Taking of Funtime One Two Three".

Logan is the antagonist in "Better Off Sled". On a snowy weekend, Logan and his friends have claimed the only sledding hill in the park, leaving the Belcher kids and their friends with nowhere to play. When he won't leave, Regular Sized Rudy enlists the help of his softball playing cousin, Mandy, who Logan also used to bully. Though he and his friends run off at first, they come back with a basketball player and reclaim their old turf. The next day, Logan and his friends threaten to throw painful, hard, icy snowballs at Louise, but are stopped by a wave of female athletes from Huxley High School who want to hurt him, led by Mandy. They all chase him down, but Louise helps him get a head start.

Logan has light-blond hair like his mother and wears a red shirt with white long sleeves that are sewn on to the insides of the short sleeves of the red shirt, brown pants and black shoes. In "Late Afternoon in the Garden of Bob & Louise", he wears a similar shirt that is orange and gray pants.

Logan doesn't appear to get along well with his mother and her parenting. He and Louise are enemies with each other; they will pester one another as much as they can, but will join forces if they have to, something they did in "Mother Daughter Laser Razor".

Logan, like many teenagers, likes playing with his friends, skateboarding and going to the mall.

His parents are Cynthia & Tom Bush. Cynthia is a garden master at a local community garden and Tom is a doctor.

Logan using Louise as a shield

The One Eyed Snakes confronting Logan 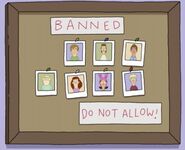 Logan on the banned board at Family Funtime