Bob's Burgers Wiki
Register
Don't have an account?
Sign In
Advertisement
in: Animals, Characters, Characters introduced in Season 4,
and 3 more 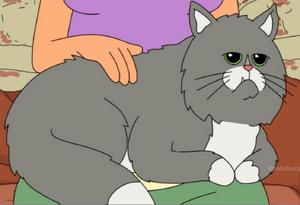 Mr. Jim Business is one of Gayle's pet cats ("the worst one," according to Louise) that resides with her at her studio apartment. He first appears in "Turkey in a Can" where it is mentioned that Gayle found him sitting on someone's porch on her way over to the Belcher's for Thanksgiving.

Mr. Business has a major role in "There's No Business Like Mr. Business Business" where he is signed by Ian Amberson to Pets Pawsitive Pet Agency for an audition to be the next spokes-cat for Chef Cat Cat Food. Bob eventually trains him to knock over the spices required for the audition, but is dropped by Ian after meeting a younger, hotter looking cat named Jessica. Ultimately, Gayle decides against going through with the audition after seeing that he isn't happy, but he is later seen successfully knocking over items around her apartment like Amberson said as pets never give up their newly-trained behaviors for commercials.

Mr. Business is a gray and white Persian Longhair mix. He has a fang protruding from the bottom left of his jaw. 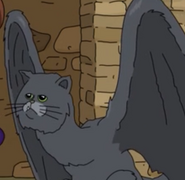 Mr. Business as a cat dragon in The Gayle Tales

Mr. Business in the "Chefcat" commercial.
Community content is available under CC-BY-SA unless otherwise noted.
Advertisement