"My Big Fat Greek Bob" is the fourth episode in Season 4, being the forty-ninth episode overall.

Bob scores a temporary gig as the cook at a frat house. Not long after fitting in, he ends up in a prank war between the frat house that involves alumnus Dr. Yap. While that is going Linda is selling sex toys with Gretchen at her house.

Bob is hired to temporarily fill in for Pepe at a fraternity house at the local college for a week. Arriving at the Beta Upsilon Pi house, he meets Turd, Pud, and Hefty Jeff. While at first somewhat disappointed at the state of the house, Bob soon starts to fit in praised for his burgers, and invited to drink with the frat brothers that night, where they decide to pull a prank with his help (as he has a license and they are drunk enough). Bob drives them, but soon discovers that they actually need him for a prank at another frat house, Alpha House, by putting a fish in the air conditioner. They are, however, almost caught by a campus police officer. Bob manages to claim he is a professor so the officer drives off, and in celebration for his help with the prank, the brothers allow him to drink from the rear end of Beta, a stuffed iguana/the house mascot before partying.

The next day, Bob prepares to leave for Beta House again when Linda says he should take along the kids (to which Tina eagerly accepts at the thought of a house full of boys). Arriving at the house, Bob is informed that Slowhand, a Beta alum who graduated long before but still hangs out with and buys stuff for the brothers despite their discomfort with him, is around. Slwohand turns out to be Dr. Yap, who gives the family a tour of the house, including to a locked "room of secrets" which Louise attempts to break into. Yap soon finds out that Bob was allowed to drink from Beta (as only a true brother is technically allowed), and had pulled off the fish prank which was his idea. Returning to the Beta house, the Belchers discover Yap lying on the floor, bruised with his head shaven. He claims the Alphas broke in and beat him up before stealing Beta, to Bob's horror.

With Yap telling a story of how the Alpha president and cronies threw him around and left a Polaroid photo of Beta in a blonde wig and tutu, the frat decides to unite in a prank war with the Alphas (while Yap tries to take leadership to start moving back in, they rally behind Bob in needing him more than ever). As the brothers march out of the house to pull pranks, the kids make numerous attempts to break into the Room of Secrets without success. As the prank war goes on, with pranks such as water balloons at the Alpha house and shaken beer cans down the chimney, and more photos of Beta sent to the house, the Betas receive a probationary notice due to the property damage they have caused. Despite the brothers being hesitant to pull off another prank, Yap unveils "Operation Spit-Take", a major prank in order to finally get back at the Alphas. That night there is to be a banquet in honor of the Alphas, receiving an award from the college's Dean Dixon. Meanwhile Louise realizes that the room of secrets is a laundry room, so it might have a chute from the upper floors. While inside, they find a photo of Dr Yap and other Beta brothers form his time in school, and behind it a secret hole with Beta, a camera, and various accessories. Bob finds the kids and Beta, and soon realizes that Yap made up the whole story (the Alphas breaking in, beating him up, and stealing Beta), and has been prancing his own frat. The family rushes to the banquet to stop him from pulling the prank and getting the brothers expelled.

At the banquet, the Belchers discover Yap in disguise as a waiter, and shows him Beta. Yap confesses that he took Beta, thinking a prank war would bring the brothers closer to him, having thrown toilet paper at the Beta hose for years to start it, and the Alphas don't even know the Betas exist. With the Belchers seemingly too late to stop the prank, he explains that under the stage is a "splatter-master saliva keg", a pony keg filled with 6 months worth of saliva from Yap's dental patients, to be set off by the Betas to spray on the Alpha president. Yap also reveals his resentment towards Bob for being so popular and loved by the Betas, before sucker-punching him. As Dean Dixon introduces the Alpha president, Bob rushes onto the stage and improvises a speech about how the Alphas president would not steal an iguana in an attempt to tell the Betas not to activate the keg. They cannot hear him though, and crawl out from under the stage. Yap runs in and slides under the stage with a wrench, knocking off the top of the keg and spraying Bob and the Alphas in the process.

At the same time, Linda agrees to host "lady good parties" for Gretchen in the apartment, at first having the kids over before sending them to bed when it's revealed the "goods" are sex toys. As the first selling party begins to fizzle out, Gretchen enlists Linda's help, who manages to sway the attendees over by claiming Bob problems in the bedroom during sex. At the next party, Linda proves to be a good salesperson by making up more about recently breaking up with Bob. Another party is held in the restaurant the night of the awards banquet, this time full of "cougars". Bob, the kids and the Beta brothers arrive at the restaurant, Bob having forgotten the feed them during the prank war. It transpires that although the Betas were allowed to stay in school, Yap and Bob have been banned from the campus for their role in the prank (and presumably the earlier prank war). The Betas however express gratitude to Bob for getting rid of Yap for them as everyone parties. 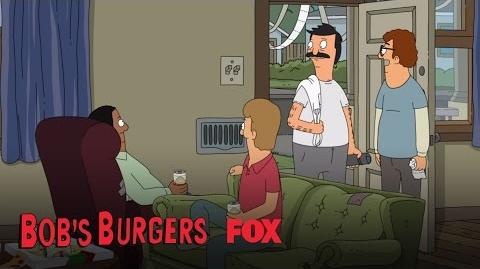 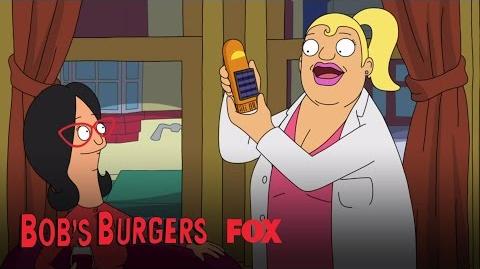 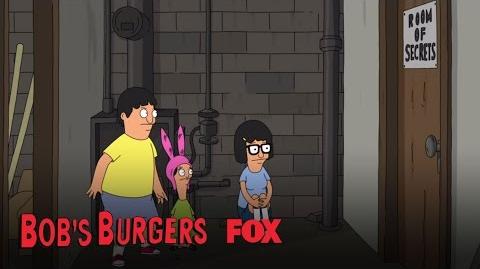 The Kids Formulate A Plan To Get Into The Room Of Secrets Season 4 Ep. 4 BOB'S BURGERS