"Roamin' Bob-iday" is the sixteenth episode in Season 9, being the one-hundred-and-sixty-sixth episode overall.

The family forces workaholic Bob to take a much-needed day off, only for him to wind up working at a local sandwich shop. Meanwhile, Linda and the kids throw a last minute baby shower at the restaurant for a female biker group.

On a morning at the Belcher household, Bob is unusually unresponsive to the wisecracks made by the kids, and says goodbye as they head to school as if they were customers. Later, Bob is distracted working, absentmindedly pouring ketchup into Teddy's coffee. Linda realizes that Bob is getting a burnout, a breakdown form which they still remember the last time (where he was cooking in his underwear and muttering). Over the course of the day, Bob acts increasingly erratic, culminating in an argument with a burger that he covers in mustard. Linda states that they need to give him a day off (Bob not having one since Easter), and the following morning, he wakes up, to find himself locked out of the restaurant by Linda and the kids.

After two hours of banging on the back door begging to be let in, Bob spots Mr. Fischoeder and chases him down in the hopes of gaining a spare key to the restaurant. Fischoeder however, instead shows Bob a taste of enjoying "nothing" such as rolling oranges down a hill to see if a car runs over it. After declining to pay into an underground snail wrestling event with Felix and their Fischoeder cousin Grover, Bob heads off on his own, intent on enjoying the day off. however, he sees the bread truck that was to deliver buns to his restaurant that day, and hops in the open back to look at them, only to get locked in as the truck drives off.

At the next bread delivery stop, Patricia's 77 Sandwiches, the driver and the owner of the shop, Patricia, discover Bob, who Patricia mistakes for a "bread perv." After explaining the situation, Bob finds out that his buns were already delivered, and he offers to helps Patricia bring her order inside to avoid an actual bread perv approaching. Bob finds out that Patricia runs the shop all by herself, including making the 77 sandwiches. She makes him one of the sandwiches for lunch, but soon at the lunch rush sees how busy she is filling orders and running them to tables by herself, so he offers to help prepare sandwiches and run them.

Later in the lunch hour, a customer named Steve comes by and orders the 39th sandwich. He's been ordering one sandwich a day and confides to Bob it's because he wants to ask Patricia out, and is taking her out after lunch. However, she rejects his offer of riding the Ferris wheel due to the fatalities rate even though no one has died in about a year (Bob says someone fell off the previous week and broke their leg but won't tell Patricia). After the lunch rush and cleanup, everything seems ready for Patricia and Steve's first date, until a call comes in for a catering order of all 77 sandwiches to go, 40 minutes from then. Bob convinces Patricia to fulfill the order and helps create the sandwiches in time. However, they realize Steve has left, and left them a note saying he will stop bugging Patricia since it seems the restaurant comes first after being stood up before. As Patricia asks if she would have to take a day off every time she had a date, Bob realizes his family was right and he did need a day off, but instead worked in a different restaurant and brought his own craziness into it. Patricia rebuts that it's not his fault, the restaurant is her life and savings at the moment. Bob brings up that he got mad at his loved ones for making him take a day off but they did it because they care, and having someone in your corner makes it all worth it. Not to marry Steve at the moment, but to have someone important. Patricia asks if she should do the hating where she runs and finds Steve, while Bob offers to close up.

Back at the restaurant, Mudflap shows up, being greeted by the family, and asks to hold a surprise baby shower for her friend Goldie, and despite it being an hour from then, Linda agrees to let them hold it there. At the shower, when Goldie arrives, she finds out what it is and starts to break down and cry, with Mudflap and Linda trying to console her. During a contest to wrap diapers on objects, Goldie in in discomfort but claims it's diarrhea from being pregnant. After using the bathroom however, Goldie begins groaning again, and admits that she was having contractions for the last 24 hours, before also admitting that she didn't tell anyone she was in labor because she was not ready to have the baby. Linda however gives a speech about how giving birth can be both scary and yet one's children can make you proud, while admitting it's not easy at all. Eventually, Goldie gives up trying to hold the baby in, and soon has to give start giving birth on the same booth table Mudflap was on.

After closing up Patricia's shop, Bob walks home and dreams about how nothing makes him happier than cooking and serving food, but also seeing his family. At first it seems they are outside waving at him for his return but it turns out they are having for the ambulance behind him coming to help with Goldie giving birth. 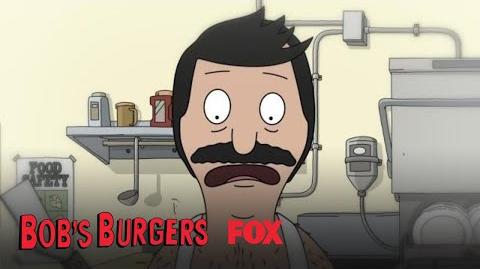 Something Is Wrong With Bob Season 9 Ep. 16 BOB'S BURGERS 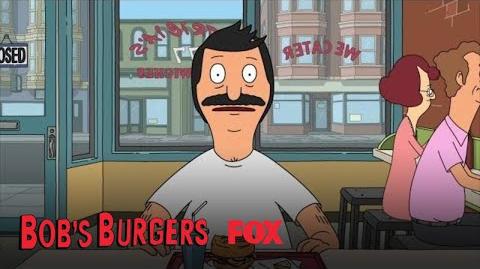