Roller? I Hardly Know Her!

"Roller? I Hardly Know Her!"

Gene is livid when his best friend, Alex, ditches him to be Courtney's roller-dancing partner. Meanwhile, Teddy, Linda and Bob let their imaginations get the best of them when they discover someone stalking the restaurant.

After school one day, Gene is waiting for Alex so they can play a game in the restaurant basement called RoboWizard Quest, when Courtney and Doug pull up a ask a favor, that Gene lift up Courtney. After barley hanging t do that, Doug explains: Courtney's roller dancing pairs competition partner had to drop out and the competition is that Saturday, and they need a sturdy boy to hold Courtney up. Gene refuses and leaves to play the game with Louise and Tina watching to mock. After playing, Linda brings snacks of pretzels and hummus, only for Alex to reveal he cannot eat hummus due to a sesame allergy giving him diarrhea.

The next day, Gene is waiting for Alex when Courtney and Doug pull up, and Alex shows up, one to reveal that he is now Courtney's dance partner, to Gene's shattered heart. The next day, Gene confronts Alex and tries to assume all went horribly and they can play the ages again, but Alex reveals he liked it, since it involves contact with one of the girls in their grade, who have never asked him for anything before, while his mother likes that he is getting exercise. As Alex and Courtney walk away to rehearse, Gene is heartbroken, and feels it is all over. At dinner, Bob advises him and the girls to go down to the roller rink where Alex and Courtney are practicing to support them.

At the roller rink, Doug is being a stage parent in training the duo while Alex's mother is annoying him with interruptions and asking Alex if he needs snacks. Gene arrives, trying to convince Alex to play RoboWizard Quest at the rink, but Alex tells him to go away and he runs off. That night, Doug arrives at the Belcher home, with a proposition for Gene: since he does not believe Courtney can win with Alex as her dance partner due to his ineptitude and weak claps, he wants Gene to make Alex disappear from the competition, citing that otherwise they will never talk or be friends again (citing his Junior Partners friend Charlie Cross who met a girl named Shannon and they were never fiends again). Gene, scared to lose his friend forever, agrees to give Alex a drink with sesame right before the show to give him diarrhea so Gene can fill in at the last minute, then Doug will find Courtney another partner for next time. Tina and Louise overhear this, and go along with him to the roller competition, with Tina trying to talk Gene out of giving Alex a soda with hummus in it.

Gene finds Alex at the roller rink and gives him the soda. Before drinking it, Alex apologizes for his earlier behavior and not playing RoboWizard Quest anymore, saying he was so excited about being around a girl , and calls Gene his best friend. Guilty at hearing this, Gene slaps the soda away and explains what happened to a confused and somewhat upset Alex, who nonetheless says he is happy Gene decided not to give him diarrhea, and the two make up. During the competition, Gene joins Alex and Courtney in roller dancing, which infuriates Doug due to it being a doubles competition, not triples, and wheels onto the floor to confront them. Courtney easy that she doesn't even like roller dancing since it is Doug's thing ,and Alex is mad Doug made his best friend try to give him diarrhea. At hearing this, Mrs. Papasian runs after a scared Doug, and Alex and Gene manage to lift up Courtney. however, they are informed they did not win. Later, all the kids play RoboWizard Quest in the restaurant basement.

Meanwhile, Bob, Linda and Teddy are noticing a woman sitting in her car across the street from the restaurant for hours. While noting her car and nice sunglasses make it unlikely for her to be living in the car, Linda speculates that she might be there to kill Linda after losing money to her in a poker game (after Linda hit her head on a stop sing and may have gotten a concussion that produced "amnesia poker"skills), while Teddy thinks that she is a ghost (with a ghost car) waiting to find the spirit of her also-deceased husband killed outside the restaurant by a tiger. The next day, they notice her walking slowly towards them before running back in fear. The day after, the woman returns and runs back to the car again. Bob, having enough, walk out to find out what is going on (after agreeing with Linda on a thumb-ups signal should he be dragged to Hell). He approaches the car and asks the woman, named Brenda, if everything is okay. She reveals that she is agoraphobic, and her doctor told her to go into public places in order to conquer said fear, choosing his restaurant due to its relative emptiness. Bob agrees to walk her in to make it easier, but Lin's overenthusiastic greeting scares her off. Later, Bob tries to get Brenda back by telling Teddy and Linda to not look or talk to her. When Brenda comes back in however, the two cannot follow this and loudly introduce themselves to her, scaring her off. However, she thanks them and says she will return the next day. 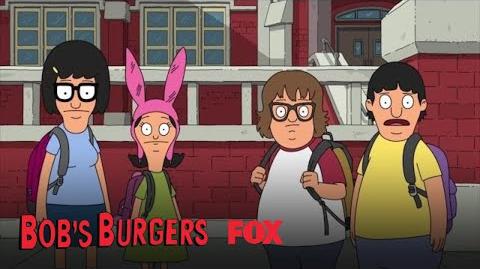 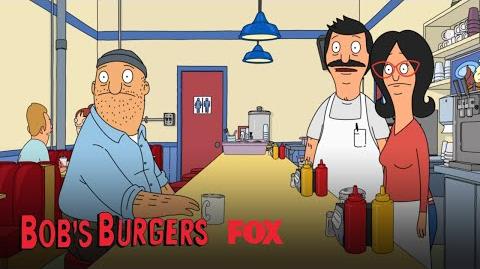 Linda Is Suspicious Of A Woman Sitting In Her Car Season 9 Ep. 8 BOB'S BURGERS