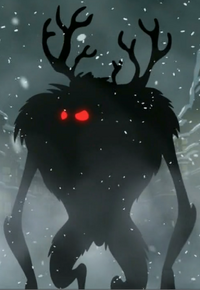 The Bleaken is an imaginary spirit who is described by Teddy as the anti-Santa. In "The Bleakening", the kids believe that the creature has stolen their presents and Linda's improvised mini Christmas tree with her treasured ornaments and hunt for it.

He steals naughty children's presents and takes them back to his lair. Teddy tells the kids that The Bleaken feeds off sadness and anger.

The Belchers apparently see the Bleaken, but it turns out to be a man in a costume attending an underground rave. Bob later wears the man's costume to distract Sgt. Bosco from shutting down the rave.

He is described by Teddy as a horned creature with lizard skin and black feathers. His horns appear to resemble those of a reindeer.

An actor portraying The Bleaken