"The Deepening" is the sixth episode in Season 3, being the twenty-eighth episode overall.

Mr. Fischoeder buys a mechanical shark that was used in a movie shot at Wonder Wharf. Teddy, who worked on the movie when he was young, has to battle the shark when it threatens the town's safety.

Another day at the restaurant, Bob uses the ice cream machine to give Mort a small soft serve he ordered, but the machine malfunctions and starts endlessly dispensing until Bob manages to unplug it. Hugo arrives to tell Bob to remove a bike locked up outside the restaurant after 24 hours, as Bob is now block captain (while Hugo has made up the title of quadrant captain and and himself new business cards to prove it). After the owner of the bike arrives and moons Bob thinking he was stealing the bike, Bob complains about the role of block captain. Mr. Fischoeder arrives, looking to test out some new attraction ideas for Wonder Wharf with the Belcher children as a focus group. After showing several bizarre concepts (such as Scare-ousel, a carousel where one rides on real horse skeletons), Bob states the town has a history with movies, like a 1980s shark move called The Deepening 3D. Teddy mentions that some of the locals, including himself, worked o the movie, where he was credited as "Handsome Lifeguard # 3", to Bob's surprise at how he looked before. Louise uses Fischoeder's laptop to find the actual mechanical shark from the movie on sale at a prop house, and Bob encourages him to buy the shark. Teddy though is reluctant, and doesn't want to talk about it.

Later, at the Wharf, after Mort gives a bad standup performance, Fischoeder publicly unveils the shark prop, which after starting up grabs onto and throws around the prosthetic arm of a shark attack survivor who had been brought to the ceremony. Teddy watches the shark and notes "it begins." At the restaurant, the Bechers, teddy, and patrons are watching the film on the wall-mounted TV, with Bob noting that he wants to see the shark in its prime, while Linda notes the other things it has attacked, such as a dog and a juggler's balls. After teddy points himself out in the film (with everyone looking at him due to the difference between himself now and the muscular, long-haired him in the film), Bob finds there are many risqué scenes in the film to skip over (such as a topless car wash and nude hot tub). Tina asks why the shark is attacking a submarine. Bob explains that in the lot, the CIA is training sharks to attack Soviet subs and are holding the sharks baby hostage to do so. Tina begin thinking the shark is misunderstood, and heads to the wharf to see the shark. Gene and Louise arrive too, with Louise planning to use Gene to cut off the shark prop's fin to sell, but in the process tips the shark over and the shark begins flopping around, destroying everything.

Fischoeder refuses to turn off the shark, both because it's the top attraction at a packed park, and because it can't be turned off unless it urns out of gas. The shark soon break the walls at Wonder Wharf, with police and fire crews getting in an argument over who gets to take over. Bob calls a block meeting as the shark starts destroying the street. At the meeting, Fischoeder pins all the blame for lack of safety measures on Bob before running off, while a guilty Tina blurts out that the kids knocked the shark over. As the townspeople get angrier and turn against the Belchers, Teddy gets everyone's attention (pretending to scratch on the chalkboard, but he doesn't have any fingernails) and tells bOb it was a bad idea to get the shark, and now they have to join together to stop it.

The townspeople brainstorms several ideas for stopping the shark, despite Tina's objections that the shark is cofusned and wants to go home, despite Bob pointing ut it's a machine. Every plan fails: a spike strip only gets attached to the tail and chases more damage thrashing around; an oil slick makes it faster; and a hook on a cable attached to a truck lifts up and hits a power line, electrifying it. Finally, they dig a big hole in the street with construction vehicles, trapping the shark under the dirt dug up in the process. As they celebrate, there's a rumbling under their feet, and the ground starts cracking towards the restaurant, indicating the shark is tunneling into the basement of Bob's Burgers. Bob, Mort and teddy all go in to face it.

Inside, it is quiet, and Teddy wants to cut the shark prop into pieces. He explains to them why he hates eh shark so much: while filming the movie, he was chatting up a cute surfer girl who also had a role, when the shaker prop nudged him from behind, causing Teddy to spill his drink on her and be told off about it. He hit the rafts services table after that. Bob however points out that he should probably blame the chuckling shark operator who pulled the prank, but Teddy still thinks the shark made the operator do it. Teddy blames they npcindet for his weight gain, and reveals he wears a "boy-die" men's girdle. Soon, the shark comes up through the floor and Mort falls thorough the hole created into the basement. The shark starts destroying more, engulfing the ice cream machine, and nearly biting Teddy, who is only saved by his boydle. He mentions the ending of the film, where it was killed by pouring wet cement down its throat, and when Bob points out they don't have a cement mixer, Tina comes in and notes the ice cream machine. Bob stretches to reach a wall outlet, which starts filling the shark with ice cream, allowing Teddy to escape. Afetr the chaos is over, Mort is shown alive coming out of the basement, while Fischoeder says he will be out of town and runs when Bob asks about repairs. Hugo is seen on TV taking credit for stopping the shark. 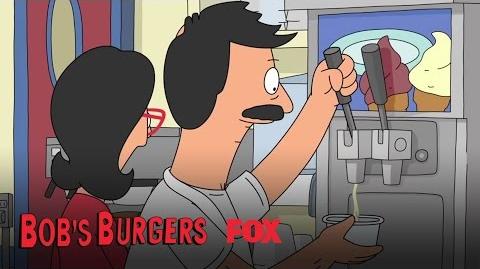 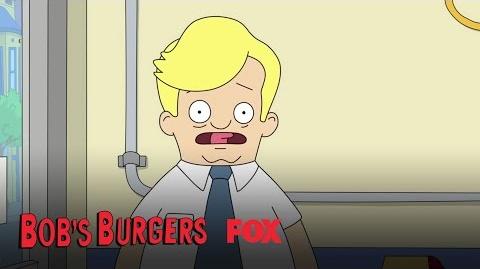 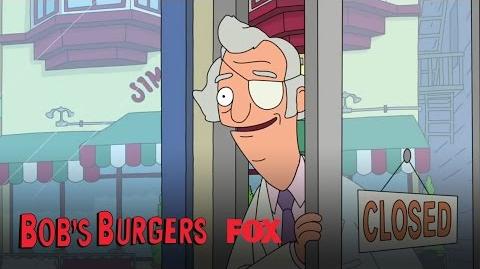 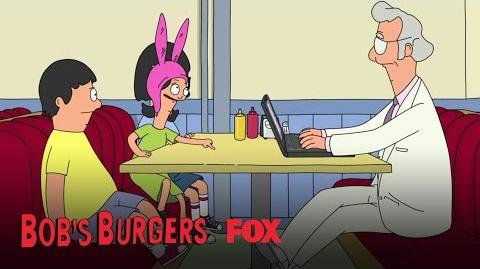