"The Equestranauts" is the seventeenth episode in Season 4, being the sixty-second episode overall.

Tina, Gene, Louise, and Linda visit an "Equestra Con" convention based on Tina's favorite animated show, The Equestranauts (TV Show), based on a toyline of pony dolls. Bob refuses to attend, disregarding it as being exclusive to young girls, but is told by Teddy that it is actually a meeting ground for a subculture of adult male fans of the series who call themselves "Equesticles" because "they have testicles". Tina is surprised to find that all the convention's attendants are middle-aged men wearing horse costumes, and feels out of place among them. She encounters a group of Equesticles led by a superfan calling himself Bronconius, and befriends them over their shared interest in the series. Noticing Tina's "Chariot" pony doll, Bronconius coaxes her into trading it for a new toy and promptly leaves. Louise overhears his gloating over the swindle and tells Tina about it.

The Belchers learn online that Tina's Chariot doll is a collectible with a rare camel toe defect. Tina devises a plan for Bob to steal the doll back by disguising himself as an Equesticle nicknamed "Bobcephala" and infiltrating Bronconius' circle of fans, to which Bob reluctantly agrees. In order to convince the fans of his disguise, she has Bob studiously review every Equestranauts episode and book to ensure his complete knowledge of the series. At the convention, Bob impresses Bronconius with his display of Equestranauts trivia, and begins to partake in various Equesticle activities with the group, such as face-painting, eating from a trough, and getting drunk on cocktails the fans call "horse medicine". Meanwhile, Tina looks through Bob's studying material to discover her self-written zombie-related Equestranauts fan fiction that is non-canonical to the series and realizes that Bob will ruin his cover if he brings it up.

At a hotel after-party, Bronconius shows Bob a safe where the Chariot doll is kept and tells Bob his intent to achieve immortality by "merging mouths" with the doll. Bob openly recalls a zombie character from Tina's fan fiction, exposing him to Bronconius. Bob's family arrives to rescue Bob as Bronconius prepares to give Bob a large tattoo on his back in the shape of a horse with his own face on its posterior. Bronconius sets the other Equesticles on the family, but Tina turns them against Bronconius by arguing that he is using their core value of acceptance to achieve his own ends. Bob then calls the hotel's faculty to open the safe, recovering the doll. However, Tina decides she has outgrown the doll and packs it away, thanking Bob for retrieving it anyway. Angered that his tolerance with the series and its fandom have been for nothing, Bob forces Tina to play with the doll before she goes to bed. 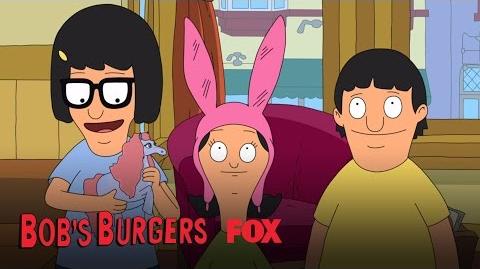 The Kids Get Excited For Equestra-Con Season 4 Ep. 17 BOB'S BURGERS 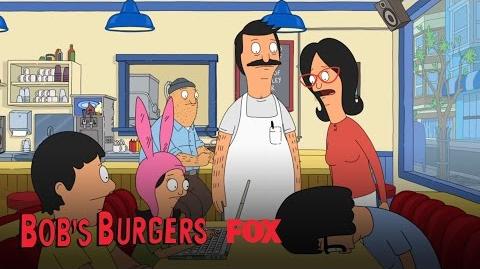