"The Fresh Princ-ipal" is the fifteenth episode in Season 9, being the one-hundred-and-sixty-fifth episode overall.

Things get out of hand when Louise wins a contest to be Principal for a Day. Back at the restaurant, Teddy has a unique suggestion to help Bob when he suddenly finds himself unable to flip burgers.

Louise is named honorary Principal for a Day at Wagstaff, thanks to selling the most chocolate bars (with some underhanded tactics). She is very excited about it, thinking of abusing her power to the fullest extent, but mostly unlocking the Cabinet of Confiscation in Principal Spoors' office, filled with a year's worth of confiscated items. At school, Louise tries to enter Spoors's office, but finds it locked before Mr Frond shows up. He lets her know that being Principal For A Day foes not actually make her principal, being a ceremonial role instead, and Spoors would walk her through but he's out at a conference.

After a disappointing morning consisting of failing the raise the school flag, watering a plant, and cutting a ribbon on a deflated basketball, Frond tells Louise to go back to class for the rest of the day until the flag lowering. Louise, undeterred, keeps Ms. Schnur distracted while picking the lock to Spoors' office. She succeeds, but is caught by Schnur who tells her she's nto the principal, until Schnur notices that Spoors' private bathroom is unlocked. As Schnur cannot go to the school bathrooms and Spoors never lets her use his bathroom, the two come to an arrangement: As only Spoors knows the combination to the lock on the cabinet, Louise will write out memos and notices on official letterhead while Schnur uses the bathroom.

Louise starts handing out memos with new policies to the students and teachers (ranking from double recess and lunch to allowing teachers to drive Uber for 15 minutes instead of 10), before Frond finds out, and he sets out to stop her. He confronts Louise in the office, and rolls her out in the principal's chair, but while distracted she runs off to the school intercom room, making more announcements with her siblings (such as Tina's suggestion that PE be Sensual ReggaE Dance Hour and gene wanting it to be Wacky Hat Day) before outrunning Frond back to the office. As time goes on, she stays one step ahead of Frond while passing out new policies and speaking to the student news channel. The policies themselves proves opular, with Zeke passing quotable notes in class and Ms. Jacobson saying the extra recess helped kids focus for class.

Back in the principal's office, Louise is still attempting to unlock the cabinet while conversing with Schnur, feeling good about helping people with her new powers, when a man named Don enters and says he was chosen to be the new guidance counselor by Spoors, his brother-in-law, and that Frond is getting fired. Louise is taken aback, but allows Schnur to introduce Don to Frond for orientation, without Frond realizing he's going to be fired. Louise, Tina and gene get a crowbar from Branca for the cabinet, and set out to work. Frond comes back to the principal's office, trying to finish the orientation for Don, and when Schnur is about to fire him, he notices the dis in the office. Louise tells Frond that he is being fired and Don is there to replace him. Frond is broken up, and is walked out by Schnur. Louise tries to tell herself ad the others that having Don as an incompetent guidance counselor. Tina notices a piece of tape with the combination written on the lock, and soon they unlock the Cabinet of Confiscation. While noting they could spend the afternoon of their lives playing with all the stuff, Louise decides to instead help Frond get his job back.

Needing an idea, Louise this on a plan: to call a special school assembly to officially give Frond a farewell and welcome Don. At the assembly, Louise has Don take questions from the students, which quickly turns chaotic (such as dead hamsters, Jimmy Junior complaining that he does not have a twin like his brothers, and Tammy and Jocelyn getting in an argument), and Don, overwhelmed, runs off and quits. They find Frond, having emptied his office, ready to leave, and lousy uses the last of her time to hire him back. As they walk back to his office, Frond notes that Louise was good at being principal for a day.

Meanwhile at the restaurant, Bob notices Teddy watching him flip burgers, when Teddy asked how Bob can flip the burgers perfectly. Bob says he just does, but then starts flipping burgers so that start breaking in half. Linda realizes what is happening, that Bob cannot think about hat he does because then he is unable to (such as being asked to show how to tie a tie). As the day goes on, Bob has more and more trouble flipping burgers without dropping them, and Teddy figures out that he has "the yips" mental block like pro athletes get. Jimmy Pesto comes over to mock Bob's restart being empty, and Linda says out loud that Bob has the yips, leading to more mockery. After an attempt at flipping the burgers carefully with two spatulas gets an underwhelming response, Bob yells at Teddy for 'breaking" him. Later, Teddy, after misremembering the title of Bull Durham, this on an idea to help Bob with his yips based on the movie: having him wear Jimmy Pesto's underwear(gained by bribing Trev), to give him something to think about other than messing up the burgers. As Bob wears the underwear, Jimmy stops over, but finds Bob is flipping the burgers perfectly and acting weird in saying that jimmy somehow helped him, freaking Jimmy out. 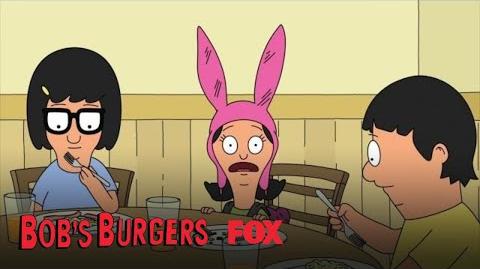 Louise Gets To Be Principal For The Day Season 9 Ep. 15 BOB'S BURGERS 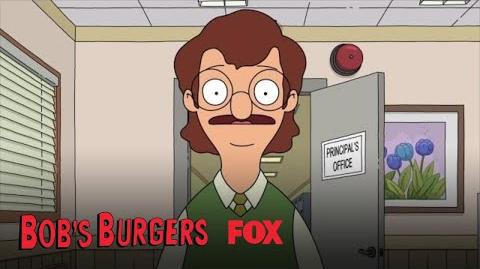 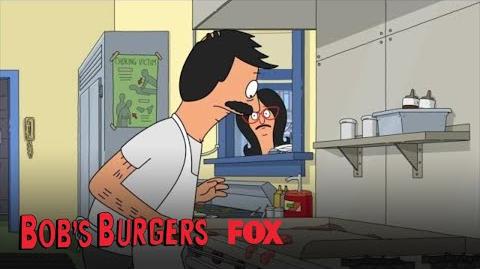