"The Hauntening" is the third episode in Season 6, being the ninety-first episode overall. It is the show's fourth Halloween-themed episode.

Teddy enters the restaurant and gets startled by an electronic toy witch. Then Bob reveals that he and Linda are taking the kids to a haunted house this afternoon. Louise becomes tired of the Haunted Houses and reveals to Mort that she has never been scared in her life! She also reveals that Tina and Gene can be scared of anything. Mort tried to scare her, but did no avail. Bob and Linda also reveals that the haunted house is special because they set it up.

The Family go to a neighborhood and wear hearing the new Boyz4Now song. Tina finds an old man with gardening shears.They arrive at a house and Bob and Linda need 4 minutes to set things up. 4 minutes later, they meet Lady Bobbenstein (Linda). The kids then meet Dr. Bobbenstein (Bob) and have Linda tickle the kids feet to pretend their rats. Bob tried to make the kids to stick their hands in a doctor box to feel human eyes, but there was nothing in the box. Linda pretended that a spaghetti is her intestines. Louise then had an idea and told Gene and Tina that they should scare their own parents. They exited through the back door and were successful into scaring Bob and Linda by jumping out of a pile of leaves. They were going to go home, but they find out that they have a flat tire! Bob tried to call for a tow, but he was not getting any phone reception. They then find an old man holding garnering shears. They decided to go back inside.

Bob finds a phone and it works! He calls Tony, Toni Tow-Me. Then metallic grinding was heard. Bob comes in line with the towing company and says that they'll need a tow truck for their flat tire. Gene realized that the house belonged to one of Mort's clients, and wonders if they're all dead people. Then the grinding was heard again. Louise thinks the pipes are desperate for attention. Then all of a sudden, a loud bang is heard, the place goes dark and the phone line is dead!

Bob used his cell phone as a light source through the house. He decided to go to the basement alone, but the rest of the family followed along with him. They found some normal stuff in the basement and they find a ghost! But it was a cloak. Then a loud bang is heard and demonic croaking! Freaking everyone out, they decided to get out of the house. But someone else is waiting outside! They went upstairs and found a room with a doll with twigs coming out of it's eyes. They had no choice but to hide in the bathroom. Louise seems a bit shaky now, but hides her fear. Then they hear footsteps approach the bathroom. Gene says quietly that he is having a good childhood until now. Then the person banged on the door, Bob had an idea, everyone climbing on the roof.

They get on the roof and Louise finds 3 cloaked people in slow, deep chanting. They summon a ring of fire around the house! Bob finally has reception and is calling for help, but he drops the phone in the bushes. Then the person chasing them opens the window and it was the gardening shears guy! Then Louise could not hold on any longer and expressed her fear towards everyone! Teddy, Mort and his mother was behind everything! Tina had the idea of the haunted house, Teddy deflated the air out of the tire while the kids were going through the decoy haunted house. Mort made scary sounds in the basement and that croaking sound was from Mort throwing out his back! Mort also had the ring of fire idea. Louise loved it and is still shaking!

Near the end of the episode, there's a music video for the Boyz4Now song "I Love U So Much, It's Scary"! 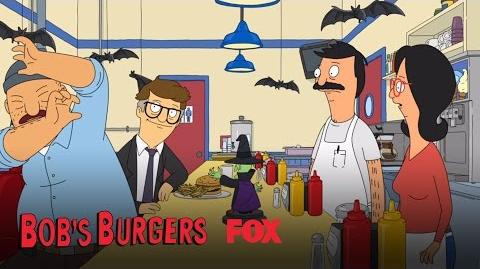 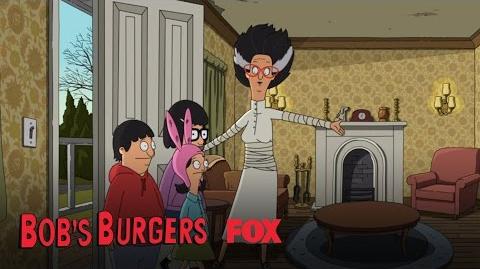 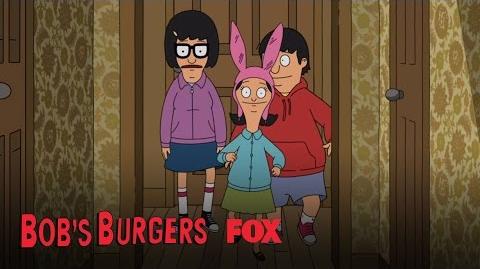 The Kids Team Up To Scare Bob And Linda Season 6 Ep. 3 BOB'S BURGERS