"The Helen Hunt" is the twelfth episode in Season 9, being the one-hundred-and-sixty-second episode overall.

The Belchers make it their mission to help Teddy get his dream girl, but Tina is convinced she's found a better match for him.

Another lazy day at the restaurant, Teddy comes in, with Linda noticing they haven't seen him in a while. He explains that he's been working at the beach house of Helen, with some of his crush on her still evident in his speech. The Belchers try to convince him to ask her out, which he refuses on account of not believing he has a chance. Bob asks what kind of work he's been doing, and Teddy says it is mostly looking in places to find something valuable her late husband Larry hid: an old Japanese netsuke worth a lot. He brings up Larry's investments, like netsukes, typewriters, and an apartment building called the Dumont several blocks for the restaurant. Louise wonders if the netsuke is at the apartment building, and the family (over the protests of Bob of closing early) convinces him to go and look in order to find it and have a chance with Helen.

At the Dumont, the plan is set to search every vent and chimney. Bob and gene are sent to the third floor, where they are mistaken for handymen by an old blind tenant complaining about the hot water in the kitchen, and due to miscommunication agree to check the pipes. On the first floor, Teddy, Linda, Tina and Louise all check in the apartment of an Irish woman named Kathleen, and as she and Teddy display a natural chemistry, Tina suggests to the others that they should work to get Teddy and Kathleen together, while Linda is adamant that they find the netsuke to get Teddy with Helen. Just then, Helen arrives at the apartment building.

Teddy explains that they were looking for the netsuke, which Helen is somewhat peeved at learning has been shared to so many people, but agrees to give Louise a reward for finding it. Kathleen sees she is Larry's widow, and lets slip that Larry had an apartment on the third floor. The group finds it and and see it is a secret man cave filled with items he was not allowed to have at the beach house such as board games and a guitar. In Larry's apartment, Tina awkwardly tries to find out if Kathleen is single, and she reveals her husband died year earlier after being hit by a train, and Teddy sympathizes but Linda tries to get him and Helen closer on the other side of the room. Kathleen leaves to go back to her apartment, while Tina and Louise follow. Meanwhile, Bob and Gene continue to fail in fixing the hot water, and are outside the other apartment trying to find where a pipe on the wall goes as Tina and Louise ask.

At Kathleen's apartment, Tina and Louise share cold pasts with her, and while Louise goes to look around, Tina asks Kathleen what she looks for in a man, before calling Teddy down to help in the apartment. While rushing down, Teddy gives Bob and gene several tools to help with the pipes without explaining. In Kathleen's apartment, Tina tries to get Teddy and Kathleen to look into each other's eyes, before Linda calls Teddy back upstairs to help open a door on the second floor with Helen, into an apartment that is currently occupied. Tina stays in the apartment still trying to convince an oblivious Kathleen that having a handyman around could be good. Kathleen mentions that decrepit state of the building, and that Larry would even nail loose stairwell boards and did plumbing upstairs. At hearing this, Louise gets an idea and takes Tina back to the third floor. After looking at the pipes, she sees they are dunned apes that go nowhere, and opens them up to find a little bag with the netsuke inside.

Louise wants to get the reward money, but Tina still wants Teddy and Kathleen to have a blossoming romance, so after some convincing (and agreeing to do Louise's chores for a month), they hide the netsuke in order to later claim the reward after making Teddy and Kathleen fall in love 9while Linda is lighting candles as teddy and Helen look in a laundry room). Meanwhile, Bob finally manages to get the hot water running after a while, and as the two celebrate, the faucet explodes and sends water everywhere. Back in Kathleen's apartment, Tina marches in and gets a dish towel dirty with pasta sauce, eventually just pushing Kathleen into the laundry room where teddy and Helen are. Lind sees something is odd, and pulls the girls aside, where Tina's suspicious denials help her realize they found the netsuke already. She rushes to grab Teddy and show him, but as she insects the item, Helen calls and startles her, causing the netsuke to drop onto the roof of the old caged elevator.

Teddy tries to step onto the elevator roof to get the netsuke, but in the process it drops, with Teddy grabbing onto the counterweights in order to not fall, but starts losing his grip. Bob and gene, having cleaned up the water and screwed the faucet on enough so hopefully a real plumber can fix it, find everyone outside the elevator cage and see Teddy, who explains that there is a lever on the roof that can release the counterweights and lift the elevator back up. On the roof, Bob and Gene try pulling various levers, eventually finding the right one, but are told to stop by Helen, who is concerned only that her netsuke could fall off. Seeing Helen run off and dismiss the chances Teddy could fall off, Linda says Helen is horrible and Tina agrees. As the elevator lifts, Helen manages to swipe the netsuke, and Teddy falls onto the elevator roof at a short distance without injury. Helen doesn't give the reward, due to having no cash, and starts to leave, before falling on a loose floor board on the stairs, then getting attacked by a stray cat, causing the netsuke to break. In Larry's apartment, Linda and Tina apologize to Teddy, and send him back to Kathleen's apartment as water appears under the door. 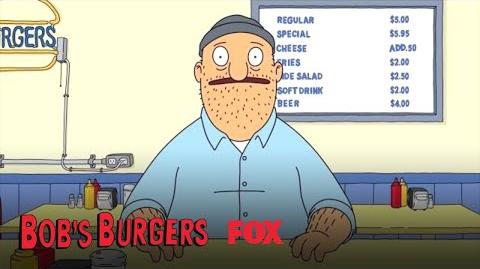 Teddy Has A Crush On Helen Season 9 Ep. 12 BOB'S BURGERS 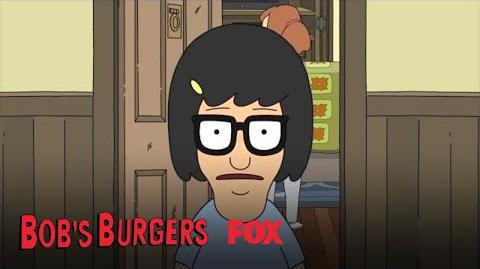 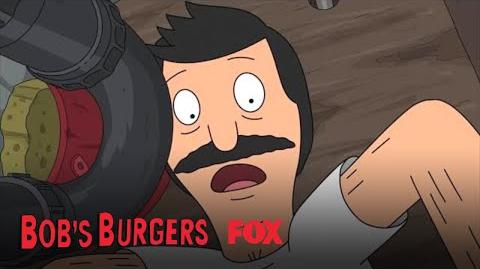