"The Itty Bitty Ditty Committee" is the seventeenth episode in Season 5, being the eighty-fourth episode overall.

Gene starts a band with Tina, Louise, Regular Sized Rudy, Peter Pescadero and Darryl, only to be kicked out and left on his own. After declaring that he will never play his Casio again, Tina and Louise join forces to help Gene rediscover his love of music. Meanwhile, Linda deals with a horrible armpit rash that has everyone disgusted.

The episodes starts with Linda talking on the phone about a rash that has developed underneath her pits. Meanwhile outside Gene playing his keyboard in the burger suit to help drum up business outside Bob's Burgers. He is accompanied by Tina and Louise who are sliding straws through lids of to-go cups. Then Regular Sized Rudy and Peter Pescadero see them as they are returning from orchestra practice with their instruments. They jam successfully and the band Itty Bitty Ditty Committee is born. They later recruit Darryl after hearing him sing Hall and Oates Maneater in the computer lab. They try to recruit him and are able convince him to join the band. While the children practice, the begin harmonize and are noticed by Lenny DeStefano who asks them to play at his birthday party. The children continue to practice but Darryl starts talking about creating a practice schedule, while Gene on the other hand is apathetic as thinks it's waste of time to practice. Meanwhile the band begins to conflicting differences between Darryl and Gene's styles of music as Darryl wants to play music that would go beyond a single beat. Gene becomes disturbed when Darryl demonstrated his point on Gene's keyboard. The final straw happens Darryl, Peter, and Rudy are practicing without Gene. They tell Gene that they decide to kick him and his sisters out of the band due to their conflicting ideals. Gene is upset by the these events and has become convinced he shouldn't be play music anymore and gives up his keyboard. His sisters try to get Gene rediscover his love for music by pretending to destroy his keyboard. The gang decides to play outside like earlier in the episode. As the kids play they start to attract a crowd who are amazed by the children's abilities. Gene regains his confidence and is soon sought out by Darryl, Peter, and Rudy who realized that they missed Gene and were board without him. Gene soon rejoins the band and leads the band and the crowd to Lenny's birthday party.

Meanwhile, Linda is bothered by her rash and is ordered by her doctor not shave for a while until the rash clears up. This leads to some unfortunate events as Linda's pit hair grow at a large rate and becomes uncomfortable for the rest of the customers. Linda tries to avoid people by hiding in the kitchen, but Hugo and Ron show up for an inspection and force Linda to wear hair nets on her armpits. After this, she decides to shave her armpits but Bob convinces her to follow through with the doctors orders and try alternative cures to heal the rash. Linda's rash eventually clears up and Bob informs her that she can finally shave until she realizes she likes her pit hair. 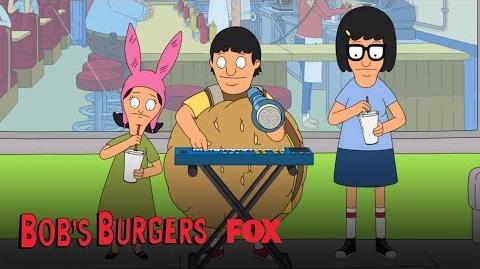 The Kids Form A Band To Promote The Restaurant Season 5 Ep. 17 BOB'S BURGERS 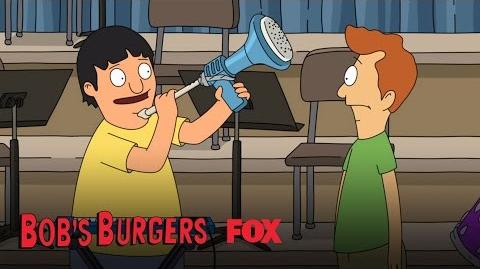 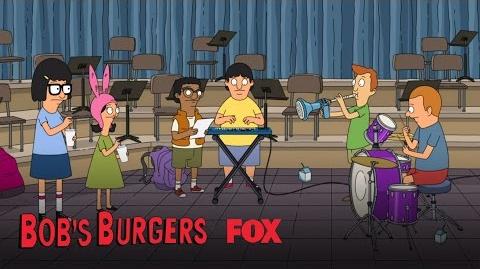