"The Millie-churian Candidate" is the twelfth episode in Season 5, being the seventy-ninth episode overall.

Tina and Louise volunteer to run Jimmy, Jr.'s class president campaign in order to keep Millie from winning. Meanwhile, Bob becomes obsessed with a knife after talking himself into buying it for $300, and gets into a dispute with Teddy over whether his knife or Teddy's hammer is better.

The episode begins with Louise telling Tina to put Jimmy Jr.'s student body president sign in the trash. It is discussed how Jimmy Jr. has 95% of the polls, and how Henry Haber's campaign is a certain failure. Millie shows up later and once again obsesses over Louise. Following this, Henry accidentally gives Millie the idea to run for student body president. Following a nightmare, Louise takes control of Jimmy Jr.'s campaign, and kills his campaign with numerous failed campaign ads, and gives Millie a massive lead. As Jimmy Jr. only wanted to be president to choose the songs at the school dance, he drops out after Millie says she will let him pick the songs when president. Following this, when Louise attempts to gain control of Henry's campaign, Henry accidentally gives her the idea to run.

Louise's campaign fails to gain momentum, with Millie still overwhelmingly winning, with even Gene and Tina backing Millie. At a debate, Millie speaks of establishing a "buddy system", which is about buddying students in pairs for school, assigned in alphabetical order by names (which would make Millie and Louise "buddies"), while Louise claims that Millie is doing this for control. As Louise's campaign continues to fail, she receives an anonymous note to go into Abby's file. Sneaking into Mr. Frond's office, Louise, Gene, and Tina find something that changes everything. Mr. Frond discovers them, and they escape. As they reach the gym, where voting is taking place, Louise congratulates Millie, and reveals that Abby's real name is Mabel, meaning that they wouldn't be besties. As a result, Millie attempts to choke Abby by her braids. As a result Millie is disqualified, and Louise is disqualified for breaking into Mr. Frond's office, meaning Henry wins by default. Henry later reveals to the Belcher children that the events of the episode were an elaborate plot to get all the opponents out of the race.

Meanwhile, Bob impulse buys a professional cooking knife for $300. As he consistently talks about the knife, Teddy brings up his expensive hammer. The next day, Teddy brings in the hammer to work on a birdhouse. As Bob and Teddy get into a dispute, Linda states that they should do a competition. As the competition ends with a tie on the first round, Bob and Teddy proceed to make holes in the counter. 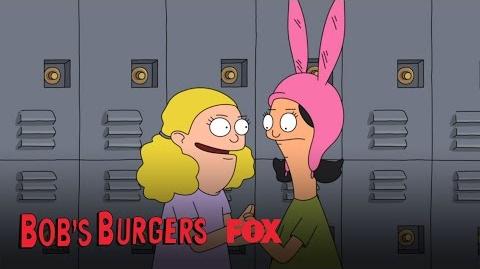