Ron introduces him to the Belchers at Bob's Burgers where he implements his own inspections while on duty like Hugo, but they all positively affect the Belchers unlike Hugo's.

In addition to being a health inspector, Tommy is also a musician who plays guitar and sings. After being told by the owner that he can no longer play any more at Pistol McSwish's Basketball & Brew, Bob allows him to play at the restaurant, but his songs are very risqué in content which causes outrage with Linda and the diners. Bob attempts to talk Tommy out of playing in the restaurant, but he starts littering rat feces on the floor and writes Bob up for it as he shuts the restaurant down.

Hugo comes back as a health inspector after learning that Tommy was shutting Bob down and declares that he wants to be the one that shuts down the restaurant. Hugo reverses the closure of the restaurant and Tommy is last seen beginning a performance at Jimmy Pesto's Pizzeria.

Tommy, at first, is very friendly, easy going and is rejective of Hugo's implementations as he gives Bob a clean slate on his inspection file. However, it is later revealed that he abuses his position to shut down establishments that don't allow him to play his music. He does this to Pistol McSwish's and attempts to at Bob's Burgers. 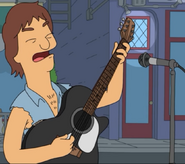 Tommy while performing at Bob's Burgers
Community content is available under CC-BY-SA unless otherwise noted.
Advertisement