Turkey in a Can

"Turkey in a Can"

"Turkey in a Can" is the fifth episode in Season 4, and the fiftieth episode overall. It is the show's second Thanksgiving-themed episode.

After Bob finds his turkey in the toilet, Louise tries to figure out who is guilty of ruining Thanksgiving dinner.

Bob is excited about a three-day brine recipe for the Thanksgiving turkey, but the holiday becomes complicated for a couple of reasons: 1.) Tina keeps insisting on sitting at the adults' table this year, to her parents' refusal, and 2.) Linda's sister, Gayle, is staying with the Belchers for the holiday, and she's bringing all of her pet cats with her. Bob, who's allergic to cats, begins taking allergy medication to combat his allergies. The next morning, Bob finds his turkey dumped in the toilet. Furious, Bob interrogates everyone, but the family insists that none of them did it.

Meanwhile, Gene tries to write a "Thanksgiving carol," and enlists his mom and aunt to help him with it, and Tina, in an attempt to be considered adult enough to sit at the adult's table, begins dressing more maturely and using what she perceives to be sophisticated catch phrases on adult topics, such as the economy and current events. The next morning, Bob is horrified to find his second turkey in the toilet again and no one steps forward.

In order to do a one-day brine, Bob goes to purchase two turkeys, one to serve as a decoy for the turkey saboteur and one to be the real turkey. The butcher mistakes Bob's return as an excuse to see him. He tells Bob that he has a boyfriend, but tells him not to let his rejection discourage him, offering to set him up with his friend, who's into "sloppy bears". As Bob prepares the two turkeys, he describes his plan to Linda: the decoy turkey will be in the apartment fridge, but the real turkey will be hidden in the restaurant fridge. He swears her to secrecy so that the turkey "terrorist" won't know. Bob also decides to hide in the kitchen, staying up late in order to catch the culprit but falls asleep at midnight. The next morning, Bob finds both turkeys in the toilet. Bob is convinced Linda, the only other person to know of the two turkeys, is the saboteur, but Linda swears it was not her and the family reveals that Linda blabbed about the two turkeys, making all of them potential suspects once again.

Bob's determined not to let the culprit prevent him from cooking a turkey and purchases one more at the grocery store. The butcher once again mistakes this for Bob's affection toward him, and breaks down, stating that things with his boyfriend, Tony, haven't been good for a long time and that perhaps he is indeed ready for a change. He excitedly asks Bob where he wants to go for a date, but Bob, flustered, tells him that he's "mostly straight" and confesses that the butcher is "way out of his league". Bob runs away, saying that he probably won't see him tomorrow, but that he'll call him.

Tina continues to try to win her way into the adults' table, while Bob successfully cooks the turkey in time for dinner. Before dinner starts, Louise claim she figured out that it was Gene and Tina that put the turkeys in the toilet to frame Louise for slowly stealing their allowance for 5 years but Louise finds out that she was wrong because Tina and Gene had no idea Louise has done that and Louise quickly lies that she haven’t. Then Gayle and Linda sing their sexually euphemistic Thanksgiving carol, but Bob, exhausted from staying up so late for the past few nights, falls asleep and begins sleepwalking with the turkey. The family follows him, where he takes the turkey into the toilet, referring to the turkey as Tina, and trying to potty train it, causing it to fall into the toilet.

The mystery is then revealed: a side-effect of the cat allergy pills that Bob had been taking is sleepwalking, and Bob's anxieties over Tina growing up so quickly manifested as him taking the turkeys in his sleep and trying to relive potty training Tina when she was a baby, just as he had potty trained all the kids when they were little. Tina assures her father that even though she's getting older, she'll always be his little girl and the entire family hugs. 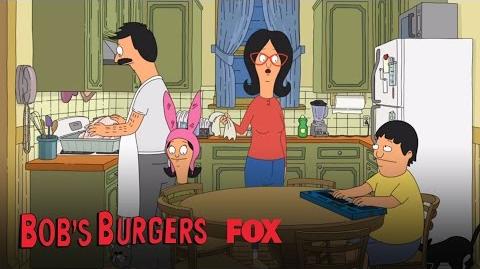 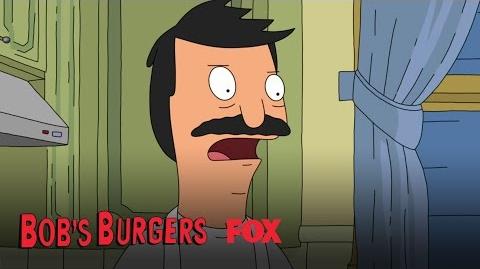