"Uncle Teddy" is the fourteenth episode in Season 4, being the fifty-ninth episode overall.

Bob and Linda have Teddy babysit the kids when they go on a romantic getaway at a burger convention. Teddy attempts to earn the title of "Uncle Teddy" by shooing away Tina's crush, who turns out he is using her for free burgers.

At the restaurant, Bob and Linda are getting ready for a weekend away for a meeting of the North Atlantic Burger Lovers and times alone with each other. However, Jen, who was to watch the kids that weekend, instead forgot and went to France with her family. Gayle too is unavailable, and Teddy volunteers to babysit for feee, which Linda accepts. Walking home from school, Tina sees her latest crush Jonas, the new delivery boy for Reggie's Deli. At the apartment, the kids are at first skeptical of Teddy's presence and plans for the weekend such as checkers. Soon though, as he is attempting to clean the kitchen pipes, his array of tools such as a plumber's snake impresses Gene and Louise. Tina leaves to pick up sandwiches at the deli for dinner in order to get them delivered by Jonas. Outside, he offers to give her a ride on his motor bike back, exciting her. When she arrives back though, Teddy expresses concern at her riding on a "gray area between bicycle and motorcycle." Jonas makes a sarcastic remark about her "father", but Tina says that Teddy is a regular watching them while her parents are out of town. Jonas is intrigued at the topic and how she has a restaurant too, and convinces her to let him throw a "gathering" there that night.

Later in the evening, Teddy, Gene and Louise bond over unclogging the kitchen pipes of a giant mass of hair. Tina gets down to the restaurant to let Jonas and his friends in, the latter complaining that the restaurant is lame, beef Jonas uses free burgers to convince them to stay, and uses his looks to convince Tina to light the grill and make the burgers. As Teddy uses his power tools to party with Gene and Louise (including using a drill on a soda bottle to spray it out and a blowtorch to make "Teddy brûlée"), he overhears Jonas using his melodica instrument in the restaurant and investigates to find the teenagers eating burgers. Teddy kick them out and they decide to go to the nearby cove by the lighthouse instead, with Jonas inviting Tina if she brings more burgers. Teddy forbids Tina from going out with them that night, and she in turn sneaks out her room window.

Tina arrives to then each gathering with burgers (form another restaurant due to not having the key). Bob calls Teddy and while Teddy checks on the kids in their beds, discovers Tina missing and the folding ladder she used to escape, waking Louise and Gene in the process. At the beach, the other teens are tired of Jonas playing his melodica and he suggests breaking into the lighthouse to make shadows puppets, which Tina agrees to. However, while breaking in through a window, cops arrive and the teens run off, leaving Tina to be arrested by a park ranger. Teddy, Louise and Gene head to Reggie's house to find out where Jonas might be, and after a quick look at his gazebo, head to the cove where they meet the ranger and see Tina in his SUV. After Teddy fails to follow the instructions on the form to release Tina as her guardian, the ranger lets her go out of frustration. Tina sees Jonas sneaking around to reach his moped/motorbike, and Teddy realizes that he didn't come back for her but his vehicle while leaving Tina behind.In anger, Teddy throws it into the ocean, before regretting it. Bob and Linda call again, stating they will be home in 15 minutes, and Teddy tells the kids they have to get home, before Bob over the phone reveals they heard it all, and they can see them on the beach ahead.

Meanwhile at the hotel, Bob and Linda attend a mixer of the chefs; however, they realize who Bob is and begin to surround and harass him. It transpires that far from being friends with the other forum users, Bob's manner of joking and giving advice online was instead seen as insulting and bullying due to his ineptitude in Internet writing and etiquette. Bob is shocked and depressed, which is not helped as a group of forum users start shoring olives at him, and Linda says to ignore them and instead try the hotel Jacuzzi. While enjoying it, a group of users including BeeferSutherland, MeatCute and JustGrillin' decide to not let him win the weekend and standoff in order to make him leave the hot tub. Tensions escalate as the Belchers use up their allowed 15 minutes and hold off the group with a chair and pool skimmer. Their roughhousing and splashing results in the hotel manager forcing them to leave. As the forum users enjoy the hot tub, Bob and Linda rush back with giant jars of mayonnaise and relish from the conference to dump in. At this, security is called and the couple leaves. 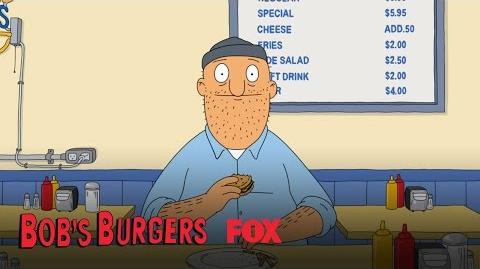 Bob & Linda Are In Desperate Need Of A Babysitter Season 4 Ep. 14 BOB'S BURGERS 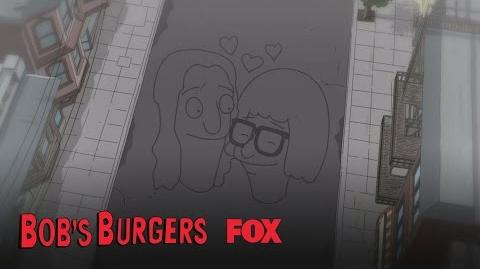 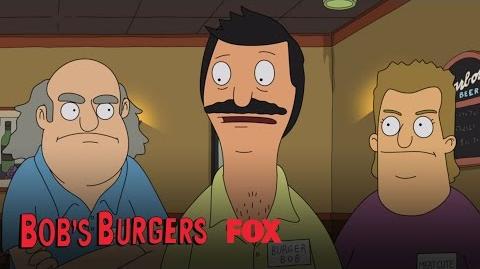