Zeke is a student at Wagstaff School who is close friends with Jimmy Pesto, Jr., his wrestling buddy. He first appeared in "The Belchies" and has since had a recurring appearance throughout the show.

Zeke comes from a bustling and (likely) troubled home that “moves around a lot.” In "Broadcast Wagstaff School News", Zeke is revealed to be the “Mad Pooper” who has mysteriously plagued the school. His emotional issues keep him from getting into trouble for the incidences.

Being protective towards his fellow classmates seems to be a big part of Zeke’s personality. He has been portrayed as a bodyguard for the kids and runs an after school women’s group focused on self-defense (“The Quirkducers”). He even falsely confesses to Mr. Frond so his best friend can go on a canceled field trip (“The Silence of the Louise”). In addition, when he is revealed to be the pooper, he admits that some of his poops were done to help Tina (“Broadcast Wagstaff School News”).

Zeke has a knack for cooking which he discovers, thanks to Bob, in “Bob and Deliver“ as he becomes head chef of the Home-Ec-staurant. In “Tweentrepreneurs”, he suggests roasted nuts with a homemade spice blend to be their product.

Zeke has messy brown wavy hair and wears a black tank top, dark green shorts, black shoes and white trainer socks which have so far only been visible in "Midday Run" when he removes his shoes to fool Tina and "Can't Buy Me Math" when he wears bowling shoes at Spare Change Lanes. His height is 4'7".

Zeke is first introduced when he accompanies Jimmy Pesto, Jr. to a derelict taffy factory. Though Tina had hoped to have alone time with Jimmy Jr., he invited Zeke and his younger brothers without asking. When they enter the factory, Zeke stays close to Jimmy Jr. and encourages him as he dances. The children all enter the elevator and are almost squished before it smashes open on the floor. Zeke attempts to crawl out, but slides out. He is left with Tina, Gene, and Jimmy. He manages to push open the door and both he and Jimmy Jr. leave on their own. At some point, the two meet up with Andy and Ollie when they go to find help for Louise. Bob frees them. He watches as they try to save Louise and suggests that they spit inside so she can swim out. He manages to escape with everyone else and is reunited with his parents ("The Belchies").

He is shown next in the school's changing room. He pranks Jimmy by pantsing him. The two get detention for wrestling in the library. He tries to impress Tammy, but only Jimmy is ("Bad Tina").

Zeke and Jimmy are best friends, so as a result Zeke is rarely seen without him. He loves wrestling with him, as they are seen wrestling each other in multiple episodes, though Zeke is known for almost always having the upper hand.

Tina has a strong dislike towards Zeke, probably because Jimmy Jr. never pays attention to Tina when he is around. After Tina invited Jimmy Jr. to a treasure hunt at the abandoned Taffy Factory, he decided to invite Zeke, Andy & Ollie as well. He seems to have an enjoyment for breaking empty bottles.

In "Broadcast Wagstaff School News", it is revealed that he is the "Mad Pooper" of the school. He explained that he did this in a way to help Tina create her news stories, but this also may reveal a path to a possible crush on Tina. Once the truth was revealed, Zeke avoided getting in trouble because his family "moves around a lot."

It is hinted that Zeke has a crush on Tina, but the latter does not reciprocate. In "Midday Run", he is quoted saying, "Damn Tina, now I got a story to tell on our wedding day. You think that's not gonna happen, but I'll getcha girl! I'm gonna getcha!" Also, in "The Oeder Games", when Tina is about to throw a water balloon at Zeke, he says, "Hold up girl, hold up! Uh you uh, know I like you, right?" to try to distract her.

In "UFO No You Didn't", in a panic, Tina kisses Zeke while thinking that the world will be destroyed by aliens, and he later remarks how he can't wait for the next alien invasion. The two also kiss in a game of spin the bottle during the credit scene of the season 6 episode, "The Hormone-iums".

Tammy has a crush on Zeke, and blackmails Tina in the episode, "Bad Tina", just so she could hang out with him and Jimmy Jr. Zeke is completely unaware of this, but otherwise seems uninterested.

Zeke's parents are seen together with him at the end of "The Belchies", where he hugs them but quickly pushes them away calling them "fools" while wiping a tear from his eye, but in "Presto Tina-o", he mentions that they divorced when he was a baby.

Zeke has since alluded to his father having a girlfriend, but later mentions a stepmother named Cheryl as well; it's not clear whether it's the same person or not but since Zeke mentioned the former first; it is likely they married off-screen. Zeke mentions his father's girlfriend having a newborn baby, but it is not clear whether it is his father's as he doesn't refer to the baby by a relationship to himself. Cheryl is heard whooping in response to Zeke adding a shoutout to her in the Mother's Day and Primary Caregivers Appreciation cabaret in "Mom, Lies, and Videotape", but isn't seen. In "Vampire Disco Death Dance", Zeke mentions that Cheryl lets him say a few curse words.

In "Boyz 4 Now", Zeke appears with his cousin, Leslie.

In "Presto Tina-o", Zeke mentions having a 44-year old brother, this is likely a half-brother with whom Zeke shares a father as he mentions his mother was pregnant with him during her prom in "O.T.: The Outside Toilet". He also later mentions he had a grandfather who died from a stroke.

In "Midday Run", we see Zeke's grandmother; she bears a strong resemblance to him and is also voiced by Bobby Tisdale.

Zeke has an aunt who smells like coconuts ("The Silence of the Louise").

“What are we waiting for? That factory's got windows and I got a passion for smashin'. Heeyah!”
—"The Belchies"

“Do WHAT?!”
—Zeke's catchphrase 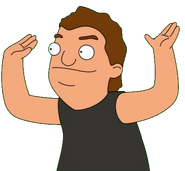